Minister of Finance Omar Malhas during the press conference on Monday. 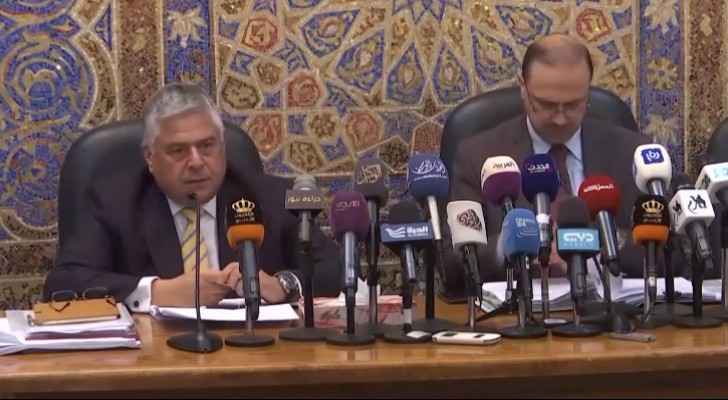 A coalition of leaders of Jordanian syndicates and unions have expressed their rejection on Tuesday of the Income Tax Bill that was endorsed by the Cabinet the previous day.

In their statement the leaders deplored the government’s “failure to consult civil society institutions" before drafting and endorsing the bill, adding that the provisions would have disastrous effects on Jordan’s economy.

The signatories of the statement warned of potential layoffs that would be caused by companies closing down if the the draft law was passed in its current form and demanded the government to hold meetings in order to reach a draft that satisfies all stakeholders.

They also accused the government that its policies did not support the cooperation between the public and private sector, which was in stark contrast to the remarks made by the Minister of Finance Omar Malhas during the press conference the previous day.

Malhas insisted that during the two week period the bill was referred to the Legislation and Opinion Bureau for feedback the government has had “intensified consultations with relevant stakeholders”, adding that 60 to 70 percent of feedback was “taken into consideration” when finalising the draft law.

As the Parliament’s ordinary session was prorogued on May 12, an extraordinary session will have to be convened by the King in order to discuss the bill. Meanwhile, according to PM Mulki, the Cabinet will be holding discussions with parliamentary blocs and committees in order to produce a law that is “just, battles tax evasion and is able to provide key services to citizens.”

This isn't the first time unions reject the bill, less than a week ago a total of 23 labour unions affiliated with the General Federation of Jordanian Trade Unions (GFJTU) opposed the draft. The bill has also been previously rejected by a myriad of voices such as the Agricultural Engineers Association and the Islamic Action Front political party.