Protest in front of Syrian embassy over tripartite attack on Syria

Jordanians and Syrians during the protest against US-led airstrikes in Syria. 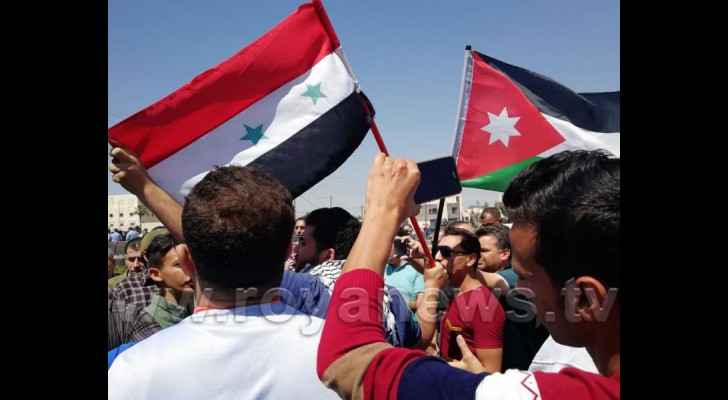 Tens of Jordanians and Syrians gathered in front of the Syrian Embassy in Amman, located in Abdoun area, in protest of the US-led tripartite attack on Syria on Saturday morning.

Protesters condemned the attack, carried out by the US, UK and France, as a violation of international law.

In the protest that was organized by the left-leaning political parties in jordan, people walked from the US Embassy of Amman toward the nearby Syrian Embassy that is also located in Abdoun.

The Jordanian Minister of State for Media Affairs, Mohammad Momani, reacted to the attack on Syria, reiterating Jordan’s position that the crisis could only be solved through political means.

Momani contended that a political agreement is the only way to ensure Syria’s stability and territorial integrity and asserted that violence would breed more violence and destruction to which the Syrian people would fall victim.

“The continuity of the violence in Syria will lead to more violence, conflict, murder, devastation, and displacement,” he added.

The US-led attack was launched on Saturday morning targeting the chemical weapons capabilities in Syria by firing 100 missiles.

Syrian state media reported that the US-led strikes only caused material damage at a scientific research centre in the Barzeh district of Damascus as early warnings from Russia lead the Syrian government to evacuate the targeted sites.