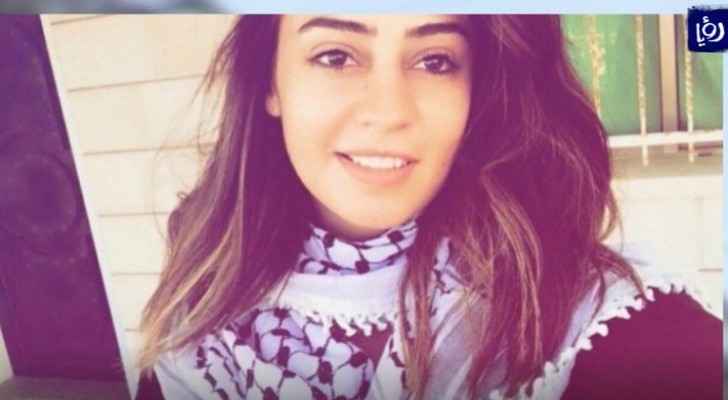 The Commission of Detainees' Affairs published precise and agonizing details on what happened with the detainee Hiba Al-Labadi, who started a hunger strike since almost 14 days protesting against her administrative detention. She's currently held in the isolation of Jalamah prison in hard conditions, where she was exposed to many violations by Israeli inspectors all the time.

The commission cited the full testimony of Al-Labadi through the advocate of the commission, and here is part of the text of her testimony:

On August 20, 2019, I came from Jordan with my mother and aunt to attend my cousin's wedding. I planned for a vacation of five days full of joy, but the occupation took me to another world that I wasn't expecting even in my nightmares.

We arrived at Allenby Bridge at 9:00 am. I was kept in a room for two hours and they closed the door, they opened it after I screamed. A female soldier kept guarding me, and during that time I got inspected. Then, I got handcuffed with plastic ties and blindfolded. They transferred me to a military base, and held me under the sunbeams for half an hour and then took me to a room. They questioned me about my health condition and inspected me again.

Then, they transferred me to Petah Tikva interrogation center. I arrived at Petah Tikva at 8:00 pm. I was so tired due to the long hours of travel and the harsh treatment of soldiers. I walked through narrow corridors and stairs and the cells were underground. The soldier kept pushing me and treating me aggressively. I took a rest for half an hour and then they interrogated me until the dawn of the next day.

The interrogation was conducted at 9:00 am and continued to the next day in the first 16 days. During these long hours, they used to take me to the cell twice on mealtimes for half an hour each time. They transferred me to Megiddo and Jalamah prisons and they took me back to Petah Tikva interrogation center. I remained under interrogation for 35 days in very tough conditions.

The interrogation was very cruel and violent, and it remained for long hours while I was setting tied to the chair, which caused pains in my back, hands and neck. Interrogators kept yelling at me loudly and they were sitting close to me. They spit on and described me with ugly descriptions. They cursed me saying: looser, mean, animal, ugly and many cruel words that I hear for the first time in my life. They told me that I am an extremist and they cursed the Islamic and Christian religions and said that Judaism is the best and that other religions are racist.

They threatened me and said that they arrested my mother and sister in an attempt to force me to confess. After they failed in this, they threatened me with the administrative detention. They told me "we do not have any evidence against you, but we have the administrative detention with the authority to renew it for seven years and a half, and then we will detain you in the West Bank and prevent you from going to Jordan and deprive you of family visits". They tried to stress me in all means.

Many interrogators questioned me and they were treating me in a bad way. They held me in a narrow cell full of insects and gave me stinky pajamas. Walls are made of cement, very rough which I cannot lean on. The mattress is very thin and without any cover or pillow. Lights on all the time and there is no windows in the cell. There is high humidity, bad smell and there is no water. I asked to take me out of the cell but they refused and screamed on me. They intended to humiliate me.

The bathroom was like a grave, it's very ugly, without a splash of the shower and there is no place for hanging the clothes. Soldiers stand outside the bathroom and I was afraid that one of them may open the door at any moment. The bathroom was scary and disturbing. They allege that they provide food and bathrooms for detainees, but the question is what the conditions of the food and the bathroom are?

Food was very bad, since I am vegetarian. I refused to eat for a week which caused me dizziness and they took me to the clinic. Then I used to eat some bread and yogurt, while interrogators were deliberately eating Kunafah in front of me.

"The Jordanian Consular visited me on September 3, 2019, and after this visit, they transferred me to Jalamah prison for three days and then to Megiddo prison for three days to force me to confess. They intended to bring men in front of the cell's door, pretending that they are detainees and they want to help me, and they also asked me to tell them about my statements in the interrogation, but I did not have anything to say.

The conditions at Jalamah prison are very difficult. I felt like I'm living in a plastic house, where the cell has a yard covered with plastic from all sides and without ventilation. The humidity is very high that I could not turn on the fan. The cell is full of insects, ants and cockroaches, and the food was very bad.

After that, they informed me that they will transfer me to Damoun prison with female detainees. When I arrived at Damoun prison I waited in the military vehicle "Bosta" for two hours and then they told me that I must go to the court. Then, they moved me to Megiddo prison for three days, where it was very cold and I asked for a blanket but they refused to give me. Instead, they gave me a thin mattress without a cover or pillow, and the room was full of ants.

It is worthy to mention that the Bosta "vehicle for transfer between prisons and courts" is another story of torture and suffering. They turn on the AC on high temperature and kept me inside for 3-4 hours. I stayed nine days in Petah Tikva, and they interrogated me 3-4 times. The last six days they did not interrogate but they kept me in the same difficult conditions.

Psychological torture is harder than physical torture. It is more tiring and they intended to harm me. I did not see such an extent of hatred and aggression in my whole life. The place was full of iron, iron doors, iron locks and even iron hearts. I lost the sense of humanity, where they did not know what humanity means. I told the interrogator that the psychological torture they use is more difficult than the physical one, he said I know.

On September 18, 2019, I was moved to section 3 in Damoun prison with women detainees. Each woman has a different story. I was shocked when I saw the detainee Israa Ja'abees and other wounded detainees.

On September 26, 2019, I got transferred to the cells of Jalamah prison as a punishment due to the hunger strike. The cell has 4 surveillance cameras, where I cannot change my clothes. The bathroom has a glass door, and the toilet also has a camera in front of it, but I use a blanket to cover it. The bathroom has no place to put a blanket to cover, therefore, I did not change my clothes for 4 days and I could not take a shower due to the lack of privacy.

I asked for the Holy Quran and carpet of prayer, they refused at the beginning and then agreed after I told them that I have the right to practice my religious rights and that I will inform Human rights organizations about this. They brought the Quran of mine and deprived me of other belongings that remained at Damoun prison.

They prevented me from going out to the yard, and used to inspect me 6 times a day in a provocative way. I am stressed and I don’t sleep well due to disturbance. They came to inspect the room at any time without taking my privacy as a female into consideration.

Today they took me to a doctor in the clinic of the prison, where I had accelerated heartbeat and stomachache.

What I suffered in the interrogation and the detention conditions of cruelty and atrocity, I felt that this might be just imagination, but I lived it. It is abnormal and unjust, where I heard about their treatment but it is different from reality. This experience is the greatest injustice to humanity, thus, we prefer death rather than humiliation.

You can read the full text of the testimony here.