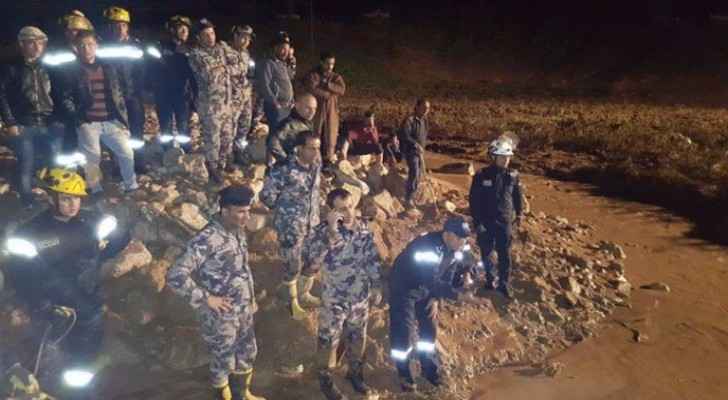 The statement said that as of 2:00pm on Friday, November 9, 2018, a crisis operations management and control unit was launched to coordinate and follow up with field-operations that were closely monitoring the roads, transferring civilian, implementing evictions and helping with the search and rescue efforts.

All PSD personnel are under the high alert status. According to the statement, about 1245 members of PSD participated in the operation, four of them were injured, and one of whom is still receiving treatment.

Joint-forces were able to secure the roads leading to the dangerous areas and ensure the safety of people and vehicles. In addition, the authority used loudspeakers to urge citizens to leave the areas threatened by floods, which contributed to the protection of many lives.

The statement said that these efforts have contributed to evacuate and rescue a large number of people in the areas that witnessed heavy rains and raiding floods. A number of Jordanian and Syrian families have been evacuated and transferred to secured places, such as schools.

About 180 Syrians, who were threatened by high levels of water surrounding their homes, were also saved.

About 3804 tourists were evacuated, including 3762 tourists who were in the city of Petra.

PSD indicated that the emergency service number, 911, received a total of (21176) calls which were answered and dealt with accordingly.

While the death toll has risen to 12 victims, CDD rescue teams are still searching for the only missing girl in this tragic event.