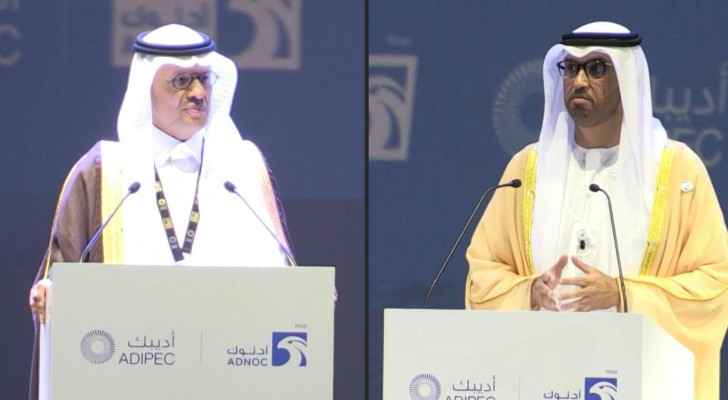 Both insisted that oil remains a cornerstone of energy supply, but said they were working to lower emissions and increase production from renewable or less-polluting sources.

"We and the UAE are going to be the exemplary producer: hydrocarbon producer, but also achieve all the sustainability goals," he added.

The Abu Dhabi International Petroleum Exhibition Conference (ADIPEC) opened just over a week before COP27 in Egypt, where representatives from nearly 200 countries will take part in the latest round of climate negotiations.

COP26 last year ended with a pledge to keep global warming at 1.5 degrees Celsius over pre-industrial levels -- a goal the world is set to miss on current emission trends.

Sultan Al Jaber, the UAE's special envoy on climate change and managing director of state-owned oil giant ADNOC, said energy production must rise to cater for a global population of 9.7 billion by 2050.

"If we zero out hydrocarbon investment, due to natural decline, we would lose five million barrels per day of oil each year from current supplies," he said.

"This would make the shocks we have experienced this year feel like a minor tremor. If this year has taught us anything, it taught us that energy security is the foundation of all progress.

"The world needs all the solutions it can get. It is not oil and gas, or solar, not wind or nuclear, or hydrogen... it is all of the above," he added.

Massive fire breaks out at 35-story building in Dubai