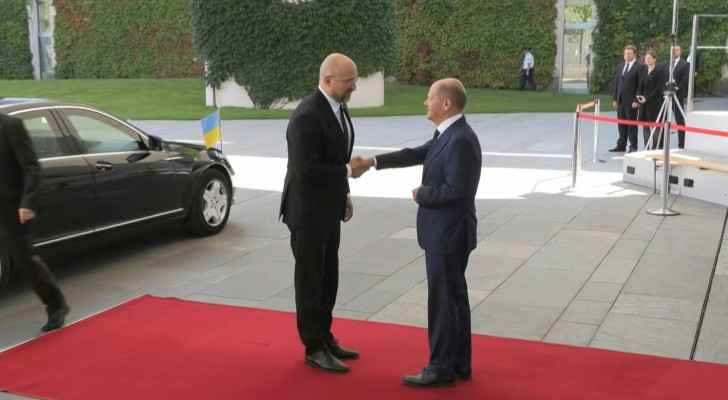 Shmygal is the first high-level Ukrainian official to visit Germany in months, in a sign of eased tensions between Kyiv and Berlin after a rocky patch.

The first stop on his trip was a meeting with President Frank-Walter Steinmeier, where Shmygal "discussed the military situation, strengthening sanctions and the need to provide weapons for Ukraine," he said on Twitter.

Germany will "continue to stand reliably by Ukraine's side," Steinmeier reassured Shmygal, according to the German president's spokeswoman.

The Ukrainian prime minister's visit marked a sharp change in tone, after a row erupted in April when Kyiv rebuffed Steinmeier's offer to travel to Ukraine.

Steinmeier, a former foreign minister from Chancellor Olaf Scholz's Social Democratic Party, had been shunned over his years-long detente policy towards Moscow -- something which he has admitted was a mistake following the outbreak of war.

Germany's SPD has historically championed close ties with Russia, born out of the "Ostpolitik" policy of rapprochement and dialogue with the then Soviet Union, devised by former SPD chancellor Willy Brandt in the 1970s.

That tradition contributed to Germany initially refusing any weapons deliveries to Kyiv, with a previous decision to send only 5,000 helmets sparking anger and mockery.

But Scholz's coalition, which also includes the Greens and liberal FDP, has since made a sharp U-turn.

Howitzers, rocket launchers and anti-aircraft missiles are among the weapons that have arrived in Kyiv.

Heavier weapons like the IRIS-T anti-aircraft systems, rocket launchers mounted on pick-ups and anti-drone equipment are due in a further military aid package worth over 500 million euros.

Ukrainian soldiers are currently being trained in Germany to use the anti-aircraft Leopard tanks.

Ahead of his trip, Shmygal said that Germany "has made huge progress in its support of Ukraine with weapons."

But the Ukrainian prime minister also stressed that Kyiv needs more from Berlin, including "modern combat tanks" like the Leopard 2.

In a speech on his vision for Europe on Monday, Scholz said he saw Germany taking on "special responsibility" to help Ukraine build up its artillery and air defence systems.

Germany, he added, will maintain its backing for Ukraine for "as long as it takes".

On the humanitarian level, Germany has taken in almost a million Ukrainian refugees, with some 155,000 Ukrainian children now enrolled in German schools.

Ahead of Shmygal's trip, Scholz's coalition partner the Greens, traditionally known as pacifists, said Germany wants to "boost" its armament deliveries to Ukraine.

"Military means never bring the solution, but it sometimes creates windows of opportunities in which conflicts can be politically resolved in a rules-based world order," the party's leadership said in a motion put forward for consideration at its next congress.

Scholz vows not to ignore 'controversies' on China visit

Scholz vows not to ignore 'controversies' on ....

Scholz vows not to ignore 'controversies' on ....

Scholz vows not to ignore ....

Proposed EU gas cap can only work with non-EU partners: ....

Proposed EU gas cap can only work with non-EU ....

Proposed EU gas cap can only work with non-EU ....

Proposed EU gas cap can only work with ....