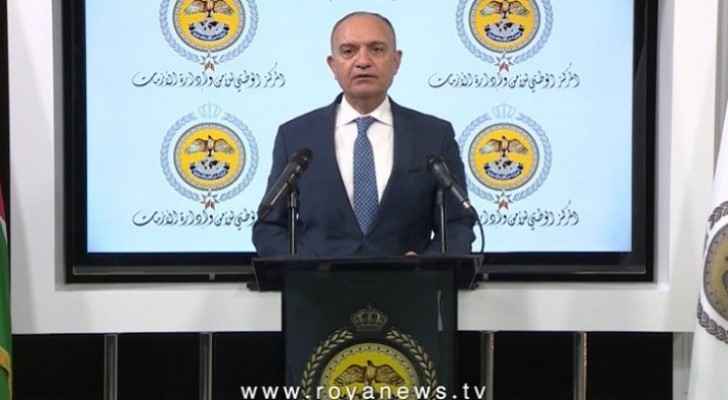 The government has decided to impose a comprehensive curfew for three consecutive days starting from Thursday midnight until Sunday midnight, the Minister of State for Media Affairs, Amjad Adaileh announced today.

The medical and nursing staff, epidemiological inspection teams, and a limited number of workers in some vital sectors are excluded from the curfew decision, Adaileh said during a press briefing at the National Center for Security and Crisis Management.

It was also decided to ease the nationwide lockdown restrictions, allowing citizens to move using their vehicles until 11 pm today and tomorrow according to the mechanism currently in place and the even-odd license plate policy in order to enable citizens to buy their needs.

"As of next Monday, May 25, things will return to the way they are now," the Minister stated.

Adaileh added that Prime Minister Omar Razzaz has issued today the Defence Order No. 12 of 2020.

The order included the following:

First: Amending the punishment stated in Defence Order No. 3 against anyone who violates the movement hours decision as follows:

1) A fine of not less than JD100 and not more than JD500 if the violation was committed for the first time. There will be no prosecution if the violator pays the minimum value of the fine within a week of the date of the violation.

Second: The violating vehicle used for the first time during the curfew shall be seized for 30 days. The vehicle could be handed over to its owner after the violator provides evidence of paying the fines, make a personal commitment not to repeat the violation and provide a receipt proving payment of the vehicle's transfer and seizure fees, if any.

Government spokesman: Comprehensive curfew to be ....