Curfew restrictions in Madaba, Jerash and Ajloun to be eased, comprehensive curfew on Friday

Curfew restrictions in Madaba, Jerash and Ajloun to be eased, comprehensive curfew on Friday 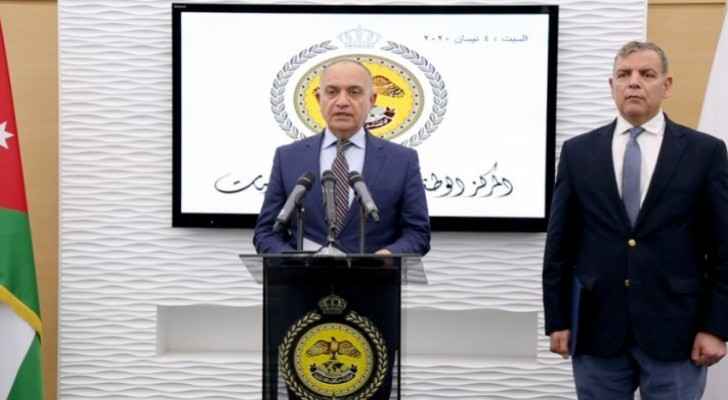 The government has decided to ease the curfew restrictions in Madaba, Jerash and Ajloun governorates and to impose a comprehensive curfew this Friday in all governorates of the Kingdom, the Minister of State for Media Affairs, Amjad Adaileh has announced today.

"Curfew restrictions in Madaba, Jerash and Ajloun governorates will be eased as of tomorrow, April 29, where residents of these governorates will be allowed to move either on foot or by their vehicles from 8 am to 6 pm," Adaileh said during a press briefing at the National Center for Security and Crisis Management.

"A 24-hour comprehensive curfew will be imposed in the Kingdom this Friday to enable the epidemiological inspection teams to conduct a large number of COVID-19 random tests," he explained.

"Law firms in all governorates are allowed to resume their work starting tomorrow," he stated.

"As you know, His Majesty King Abdullah II, may God protect him, is exerting an exceptional domestic and international effort, in light of this crisis, and examines on a daily basis its implications at all levels and ways to mitigate its effects.

He reaffirmed that "people will be allowed to use their vehicles from 8 am to 6 pm as of tomorrow, April 29, according to the even-odd license plate policy," stressing that the Public Security Directorate (PSD) will publish a detailed statement, which includes all information related to the decision enforcement mechanism.

He said that allowing the use of vehicles aims at facilitating people's movement in order to secure their needs,  affirming that violators will be fined and their vehicles will be seized for a month according to the defence orders.

Adaileh warned that legal measures will be taken against everyone who causes obstruction to the citizens' movement, or the traffic movement and those who use their vehicles for the unnecessary or move in the streets after 6 pm. He also warned the elderly and children of leaving their homes because they are at higher risk to get infected with the virus, according to medical estimates.

"We urge people to adhere to the utmost care and caution and to follow the preventive and precautionary measures by wearing face masks, gloves, practicing social distancing and avoiding direct contact with others as much as possible.