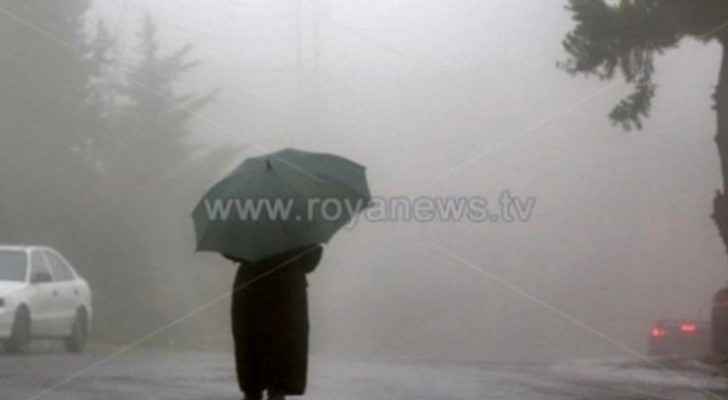 A cold air mass, centered over the south of Turkey, will hit the Kingdom today and tomorrow, bringing temperatures down with cold and cloudy weather conditions, according to the Jordan Meteorological Department (JMD).

During daytime today, rain showers are expected in the northern and central parts of the Kingdom.

At night, rainfall may be heavy, accompanied by thunderstorms and may cause flashfloods in the valleys and lowlands.

Strong winds are expected and may reach 50-60 km/h.

Tomowrrow, a further drop in temperatures is in the forecast, as the weather will be cold with cloudy to overcast skies during daytime.

A slight chance of rainfall is expected at night. Northwesterly active winds are forecast, causing dust to rise in the Badia region.

However, a rise in temperatures is expected on Monday, yet the weather will be relatively cold in most areas and pleasant in the the Aghwar, Dead Sea and Aqaba.

JMD warns of foggy weather at dawn and early morning over the high mountains and parts of the Badia region.

A further rise in temperatures is expected on Tuesday, as temperatures will be 2-3 degrees above their annual average.

The weather will be generally cold in Amman and warm in the Aghwar, Dead Sea and Aqaba.