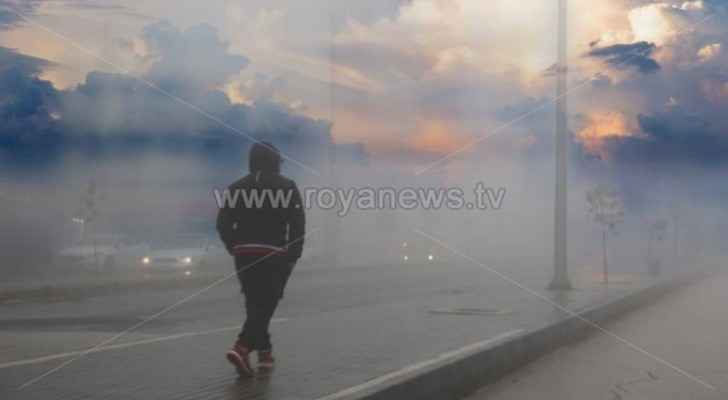 According to the latest weather updates, the Kingdom will get affected by a weather depression as of Friday evening, February 21.

Tomorrow, a remarkable drop in temperatures is expected, as they will be 3-4 degrees below their annual average.

During daytime, the weather will be relatively cold and cloudy in various parts of the Kingdom.

Rain showers are expected in the northern, central and southern regions and may be accompanied by thunderstorms and hail showers in some areas.

Arabia Weather warns of the following:

-Risk of flooding due to heavy rainfall.
-Risk of slippery roads in the southern high mountains due to hail showers.

At night, the weather will be cold, cloudy and rainy in various parts of the Kingdom.

Foggy skies are in the forecast over the high mountains, with northwesterly moderate speed to active winds.

On Thursday, February 20, temperatures will remain below their annual average, as the weather will be cold, with partly cloudy to overcast skies in several areas and a chance of rain showers.

Northwesterly moderate speed winds are expected over the mountains and the eastern Badia region.

At night, the weather will be cold and cloudy. A chance of rain showers is expected, with foggy skies.

Citizens are warned of the risk of low visibility due to fog over the mountains.

On Friday, February 21, a slight rise in temperatures is expected, as they will be around their annual average.

The weather will be foggy in the high mountains, the eastern plains and the Badia region, especially in the morning.

Arabia Weather warns of the risk of low visibility due to fog on Friday dawn and early morning.

On Friday evening, the weather will be cold in several areas, with cloudy skies.

After midnight, a cold air mass is expected to hit the Kingdom, as temperatures will remarkably drop.

Rainfall, accompanied by hail showers is in the forecast.

On Saturday, February 22, a weather depression will hit the Kingdom, bringing temperatures down by 2-4 degrees.

The weather will be generally cold in several areas and extremely cold in the southern high mountains.

Arabia Weather warns citizens of foggy weather over the high mountains and flooding due to heavy rainfall.

At night, chilly weather conditions are in the forecast, with rainfall in the northern and central regions of the Kingdom.