Agreement reached to stop all forms of protest, escalation in Ramtha 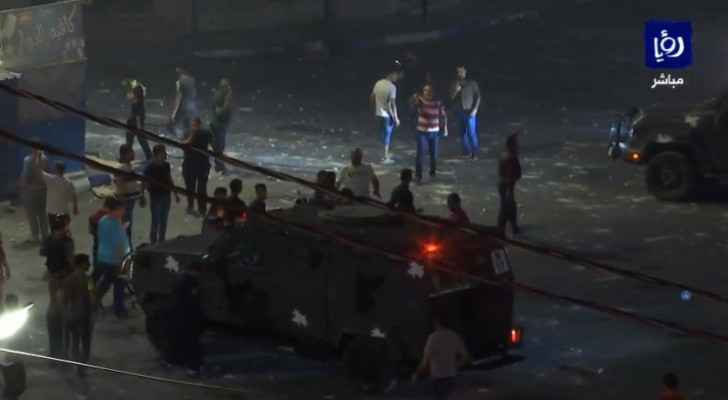 Following the riots that took place in Ramtha district of Irbid on Friday evening, August 23, 2019, a meeting of government representatives and a number of dignitaries in the district held on Saturday, August 24, 2019, resulted in ending all forms of protest and escalation, and supporting the government's measures taken to prevent the smuggling of drugs, weapons and cigarettes.

After the meeting, the Director-General of the Jordan Customs, Major General Abdulmajid Alrahamneh said that the representatives of the government and dignitaries of Ramtha agreed to combat any attempts of drugs, weapons, and cigarettes smuggling, while they agreed on facilitating the entry of personal goods such as clothing, food, and supplies to the Kingdom, in accordance with the provisions of the legislation in force.

Rahamneh also explained that it was agreed to set up an appropriate mechanism to facilitate passengers' entry to the Kingdom through the Jaber Border Crossing during public holidays.

The meeting also agreed on sharing the list of the names of people from Ramtha, who are prevented from traveling, with the Ministry of Interior and taking appropriate measures against them.

For his part, MP Khaled Abu Hassan affirmed that it was agreed to stop all protests in the area, which took place following the government's new amendments on the smuggling law.

Abu Hassan also praised the cooperation of the Prime Minister, Omar Razzaz, government agencies, the Jordan Customs Department as well as the people of Ramtha to solve this issue.