GAM on why Downtown drowned - details

GAM on why Downtown drowned - details 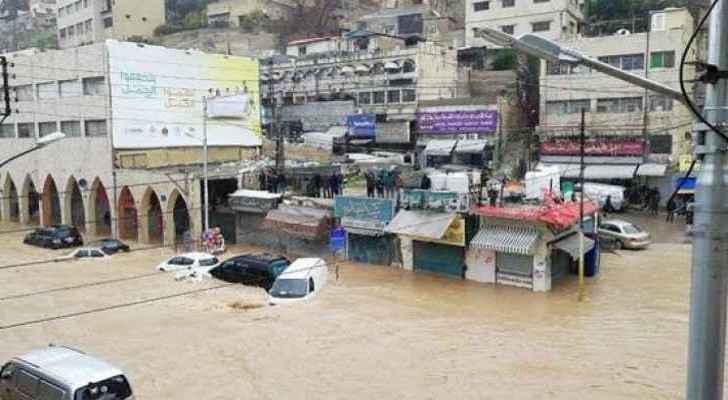 The Greater Amman Municipality (GAM) denied being held responsible for the disasters resulted by the floods on Thursday, asserting that the rainfall which caused the damage to streets and shops all over the country was unprecedented.

GAM said in a statement that Talal Street in Downtown Amman contains one large underwater pipeline, which is under Seil Amman and absorbs very large quantities of water that flow from Amman’s seven hills and from other areas, as it is the only place for rainwater collection and thus has overflowed causing floods.

"During the past years, Seil Amman has never flooded as it did on Thursday," GAM explained, pointing out that the floods of 2015 were much lesser than this year.

Downtown Amman recorded the highest rate of rainfall, estimated at 140 mm. However, GAM stressed that its cadres are fully qualified and are always ready for such cases in winter, adding that almost 5,000 cadres were on the field last Thursday.

Over the years, the senior management of GAM has been carrying out extensive improvements in water drainage networks in Downtown Amman, especially in King Hussein Street, which were worn out and in dire need of maintenance and rehabilitation with a tender estimated at millions of JDs.

GAM also added that almost JDs 6 million are annually spent on rainwater drainage projects and that there are specialized committees which were formed a couple of years ago to keep an eye on climate change in the Kingdom.

GAM intensified its efforts to clean the Quraish Street in Downtown Amman, after the Department of Road Maintenance re-asphalted parts of the street damaged by floods.

Officials at GAM estimated damage to the infrastructure at thousands of JDs, particularly in Downtown Amman.

The officials said that it is difficult to limit the damage all at once, adding that all departments working for the Public Sector are asked to conduct a comprehensive survey in order to provide a full report on all types of damage caused by the last weather depression.

In addition to the damage to the infrastructure, the largest damage was caused to shops and stores which were raided by floods, and traders estimate their losses at millions of JDs.