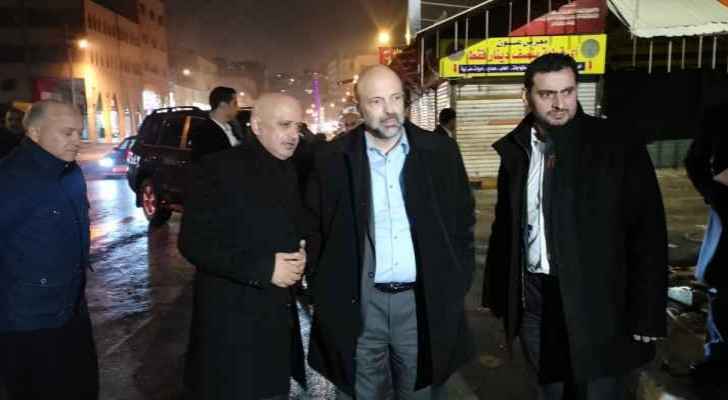 On his return from London on Friday, Prime Minister Omar Razzaz reviewed the situation in Downtown Amman after many shops suffered heavy losses and damage due to heavy rains and floodings which the Kingdom witnessed on Thursday.

The Prime Minister, accompanied by Minister of Industry, Trade and Supply Tareq Al-Hamouri, as well as Chairman of the Amman Chamber of Commerce Khalil Al-Haj Tawfiq, visited shop owners who were affected by the floods.

"The situation is painful," the Prime Minister said. "The government is aware of the damage and will examine the matter, verify it in all its aspects and take the necessary action."

Razzaz pointed out that the rains which have fallen, according to the estimates of the competent authorities, is unprecedented, and that we should always be ready for such exceptional circumstances, and harness the various possibilities to be able to deal with them.

PM Razzaz praised the community initiatives launched to help the owners of shops affected by the bad weather conditions, stressing the government's support for such initiatives.

Chairman of the Amman Chamber of Commerce Khalil Al-Haj Tawfiq commented in a Facebook post that Razzaz promised to follow up with complete interest, noting that he listened to some shop owners regarding their losses and the magnitude of the damage inflicted on them.

"A good gesture deserves thanks and we await decisions to compensate the affected people, God willing, and to hold the ones accountable, and ensure that these events do not recur," he said.