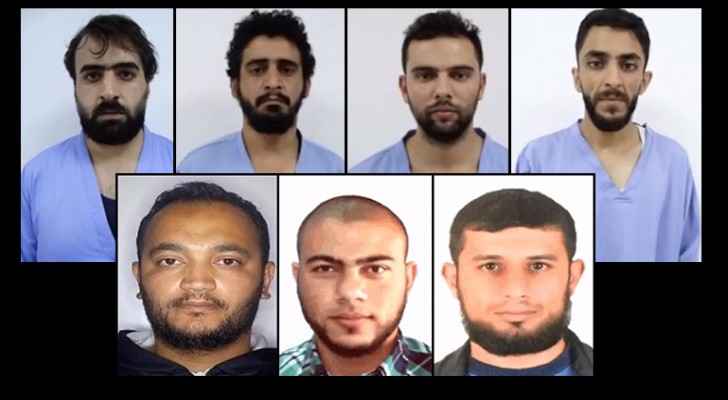 The General Intelligence Directorate (GID) released a filmed-confession where members of the "Salt Terrorist Cell" admitted their crime and disclosed detailed information about their background and associated terrorist-attacks plots.

The video was broadcasted on Roya TV Channel on Thursday night, September 13, 2018

On August 10, 2018, a Gendarmerie (Darak forces) bus that was parked in a neighborhood in Fuheis, near the area where the annual Fuheis Festival was taking place, suddenly exploded. The explosion resulted in killing and injuring a number of officers from the police and the Darak forces.

The following day, a statement released by the Ministry of Interior confirmed that the explosion was caused by a terrorist attack. A homemade explosive device was planted in the area where the security vehicle was scheduled to park and was detonated shortly after the bus arrived.

On August 11, 2018, and in less than 12 hours from the Fuheis bus attack, authorities determined the suspects involved in the explosion, their whereabouts and their hideout place: a residential building in Nagb Al Dabbour area, northwestern city of Salt.

The group of terrorists refused to surrender and initiated attacking the security forces with heavy gun-fires. Accordingly, security-joint forces executed a 10+ hours operation, Salt Raid, that resulted in arresting five suspects, while three bodies were pulled from the rubble of the building. Name: Ahmad Hashem Radwan Nsour
Birth: 5/10/1986
Nationality: Jordanian, lives in Salt
Education: He holds a Diploma in Civil Engineering
Career: works in a house-helpers' recruitment office
Status: He was killed during the raid Members of the terrorist group confessed to their crimes. They mentioned the names of their targeted facilities and the tools and techniques used in which they wanted to execute the attacks.

Explosives found at the group's possession

In the video, one of the members stated that they chose the option of explosives because they believed it would yield better results. The group succeeded in building a total of 55 KG of explosives and executed a trial-explosion in a far away area in Maisah, Salt.

Nitrogen gas leakage from one of cylinders in Al-Hussein ....

Nitrogen gas leakage from one of cylinders in ....

Nitrogen gas leakage from one of cylinders in ....

Nitrogen gas leakage from one of ....