Sergeant Adnan Qouqazeh was laid to rest on Saturday. (Roya) 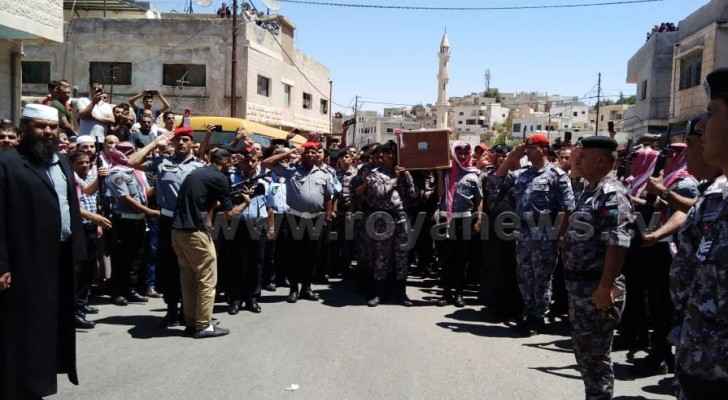 Sergeant Adnan Qouqazeh was killed in Fuheis on Friday night, after the Darak forces security bus he was sitting in suddenly exploded.

Qouqazeh’s funeral is taking place now (Saturday) in the city of Jerash, north of the capital Amman. It is being attended by the Minister of Interior, Samir Mubaidin, security officers, government officials, and dozens of civilians.

The videos below were taken live from the funeral at 13:25 local Amman time.

A statement released by the Ministry of Interior on Saturday confirmed that the explosion was caused by a terrorist attack. A homemade explosive device was planted in the area where the security vehicle was scheduled to park and was detonated shortly after the bus arrived.

Six officers from the General Directorate of the Gendarmerie of Jordan (Darak forces) and the Public Security Directorate (PSD) were injured in the incident.

The Ministry said that “this cowardly act has only made our security forces more determined to fulfil their sacred duties of protecting citizens’ lives and dignities,” adding that those responsible for the attack will be brought to justice.

Prime Minister Omar Razzaz said on Saturday that “Jordan will forever stand firmly in the face of vicious terrorism.”