GAM does not accept the behaviour of this employee, whom they said his actions do not represent them in any way. (Roya) 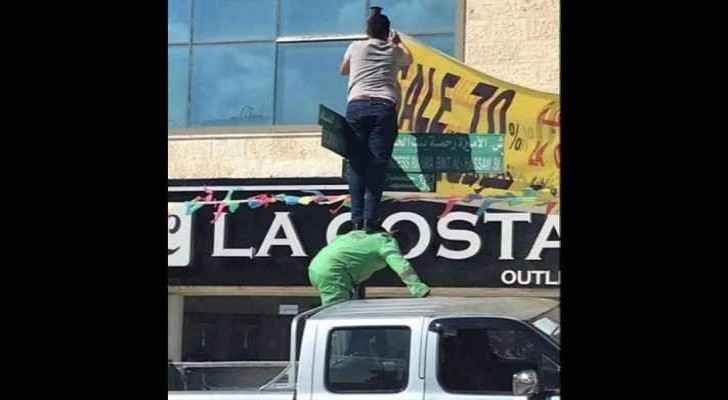 The Greater Amman Municipality (GAM) responded on Sunday to the viral photo which showed a municipality worker standing on top of a binman’s back in Amman.

Jordanian social media users were infuriated by what they described as “degrading and slave-like behaviour.”

Many also criticised GAM for not providing their employees with a step ladder or mini lever to help with lifting up the man in the picture so he could hang up the banner shown in the photo.

GAM’s statement, which was released on their official Facebook page, said:

“GAM Spokesperson Mazen Al Farajeen has expressed his regret at some social media users’ reactions to the photo and for overstepping their boundaries with their responses to the municipality.

This municipality employee’s behaviour is wrong and his actions do not represent GAM in any way, while every individual at the municipality condemns his behaviour as well.

GAM immediately investigated the authenticity of the photo after it went viral, to ensure that no binman is mistreated in any way.

The municipality worker has been suspended and once the investigation into his actions has been completed, we will announce the final outcome of his punishment with full transparency.

The actions taken by GAM to deal with this incident are sufficient and should deter social media users from making any further inappropriate comments towards the municipality.

Around 23,000 individuals work for GAM and some of them may behave in an unacceptable way, and when they do, they would not be representing GAM and its beliefs.”