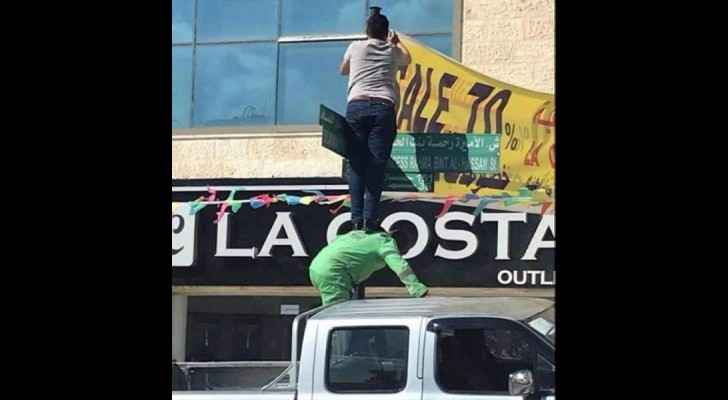 The Greater Amman Municipality has launched an immediate investigation into a picture that was shared on social media earlier today, which showed a man standing on top of a binman’s back, as he tried to hang up a promotional banner on top of an outlet shop's sign.

"The dignity of the workers of the country is safeguarded and any abusive individual behavior will be investigated and dealt with firmly," GAM tweeted on Sunday.

The image in question provoked Jordanian social media users, who were furious to see the binman being used as a “slave.”

Some people questioned the authenticity of the photo, however, a source in GAM told Roya that “the photo is real and it was taken in Amman.”

The same source added that the worker standing on top of the binman is a GAM employee.

Many of those who commented criticized GAM for not providing a small crane or lever for the worker to use, or “at least a step ladder.”

Others were infuriated that someone would treat binemen in such a degrading way “just because they are binmen.”

Many questions spring to mind, most notably: What would have been the public’s reaction had it been the binman who stood on top of the man’s back?