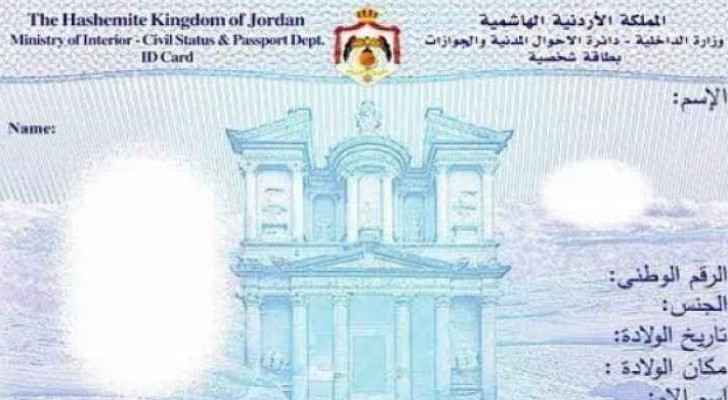 The Civil Status and Passports Department (CSPD) announced on Saturday that it will continue issuing smart national IDs in all their offices across the Kingdom to Jordanians who have not yet renewed them.

Nevertheless, the CSPD cautioned citizens that the Council of Ministers’ decision prohibiting the use of the old IDs as valid identification in all public and private institutions after June 30, 2018 is still in effect.

Jordan launched the change to a smart ID in the beginning of last year, with an initial deadline of June 30, 2017.

Despite the CSPD increasing its working hours, opening additional centers, and receiving help from private telecommunication companies in the form of busses to access remote areas, a large number of Jordanians had not renewed their IDs by the end of June 2017.

The government shifted the deadline a number of times, the most recent being the end of March, and rescinded the decision to charge a penalty fee, keeping the ID free.

The ID is meant to adhere to high security standards and enable the government to enhance its services by linking Jordanians’ data for healthcare and social security among other institutions.

The ID was awarded Best Regional ID Document of the year 2018 in Poland by Reconnaissance in February.

“Jordan’s Ministry of Interior has rolled out an ambitious new citizen ID programme offering a range of innovative services that will transform the way the public interacts with the state. The new programme has been implemented in collaboration with the country’s Ministry of Information and Communications Technology (MoICT),” the awarding entity stated at the time.