Officials close off the area following the attack in Baghdad. (SkyNews) 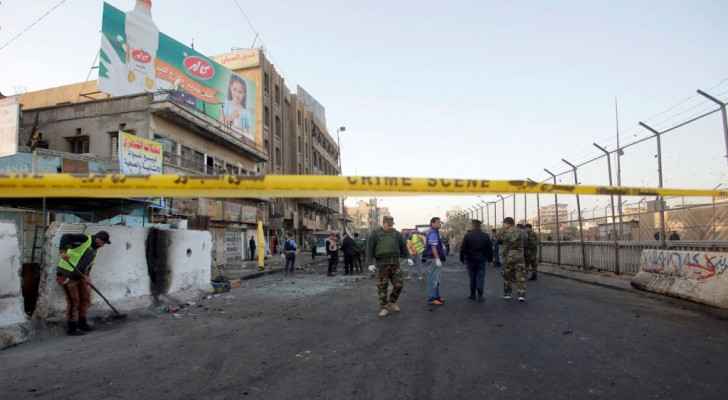 Double suicide attacks hit the Iraqi capital, Baghdad, killing at least 35 Iraqis and around a hundred were injured on Monday.

Both bombings were carried out by two men who were wearing vests packed with explosives, according to the Iraqi Interior Ministry.

While there is no claim of responsibility of the attack yet, the Islamic State (ISIS) is mostly responsible for deadly attacks in Iraq.

Meanwhile, analysts warned that ISIS would increasingly turn to such attacks as the Iraqi government declared victory against ISIS last month after three years ago.

Jordan on its turn condemned the deadly bombings in Baghdad, as King Abdullah II sent a cable to the Iraqi President, Fuad Masum, condoling him over the victims of the twin terrorist attack, Petra reported.

In his cable, the King strongly denounced the cowardly terrorist act, confirming Jordan's full solidarity and support for Iraq and its people in its fight against terrorism .

King Abdullah II also expressed sympathies to president Masum and families of victims and wished the injured a speedy recovery.

Earlier on Saturday, another suicide attack killed at least five people in northern Baghdad near a security checkpoint. However; there was no immediate claim of responsibility for that bombing.