Palestinians are fighting occupation by all ways. (Social Media) 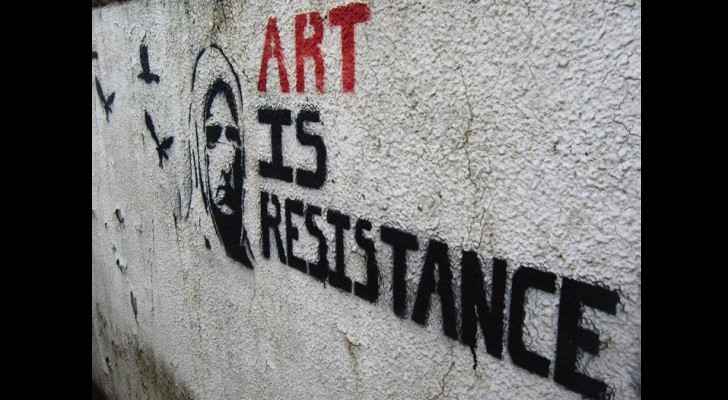 Palestinians are trying to resist occupation by all means, with many of them have been fighting for their rights in the streets. Meanwhile others are relying on their own ways to deliver their message to the world, with the only way they know… their art works.

‘Wajib’ (‘The Insult’) won the Best Muhr Fiction Feature Award for the best Arabic feature film, while the film's two cast members Mohammad Bakri and Saleh Bakri were awarded the Best Actor award equally for their roles in the film. ‘Wajib’ was produced in 2017 by the well-known Palestinian director, Annemarie Jacir, who has produced eight films, many of them award-winning.

It is categorized as Comedy and Drama, and rated 8.1/10 on IMDB, telling the story of the rediscovery and reconciliation of a troubled father-son relationship.

Recently, it won the Don Quixote Award at Locarno Film Festival, and it is the year's Palestinian Oscar entry.

Another award went to the Palestinian film ‘A Drowning Man’, which won the Best Muhr Short Award for the best short film. The film is for Mahdi Fleifel, the Palestinian-Danish director, and it tells the story of refugees in the Middle East after a man who moved to Athens is metaphorically drowning in a sea of worries and troubles.

It is a short Drama film, rated 6.9/10 on IMDB. It won three awards and was already nominated for 20 awards.

The film is about Syrian refugees in Lebanon, who are working as construction workers, and by decree of the Lebanese government, they are forbidden to leave the construction site after sunset, while they are suffering the deprivation of the most basic human and workers rights.

It is rated 8.1/10 on IMDB, and it is categorized as a documentary film. As Palestinians protest in the streets to express anger and rejection of Trump’s recognition of Jerusalem as the Israeli capital, these films highlight other ways in which Palestinians are making their mark on the world.