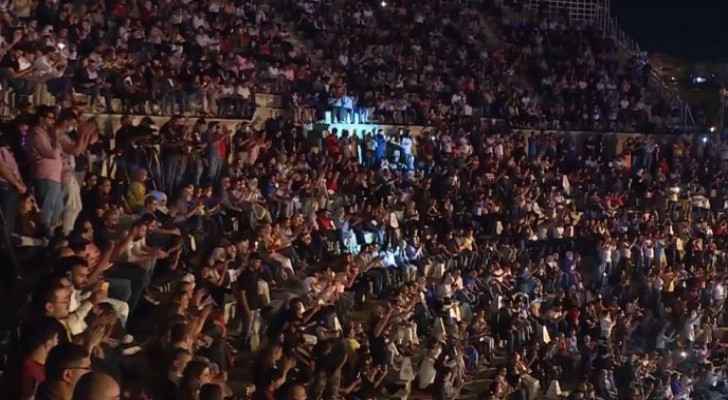 The large numbers attending the Jerash Festival caused a wave of uproar and disapproval on social media in Jordan, due to the lack of adherence to health measures such as face masks or social distancing.

Roya’s cameras shot scenes of the lack of adherence to COVID-19 safety measures among those attending concerts at Jerash Festival, despite the government’s emphasis on the importance of the matter.

The shots clearly show the people attending not wearing masks or committing to social distancing.

Some social media users noted that while this clear violation is happening at the festival, the government still prohibits more than six people to be seated at one table together in restaurants.

The launch of the thirty-fifth edition of the Jerash Festival was announced at a time when the government began implementing the third and final phase of the sector opening plan, on Sept. 1, in a plan to reach a “safe summer.”

Some people, who are against the festival, warned of its consequences as it would increase the number of cases in the country.

The Parliamentary Reform Bloc criticized the government’s decision to hold the festival and other artistic events during the pandemic.

They added that the government’s permission to hold these events, at this time, reflects its confusion, contradiction and discrimination in the application of the law.

According to them, it also reflects the government’s lack of seriousness in taking citizens’ health into account, especially since it is the same government that refused personal events to be held despite the small number of participants in them.

Meanwhile, a member of the epidemiological committee, Bassam Hijjawi, said that as the infection rates have been stable for a while, crowds such as those in the festival are not acceptable and should not be allowed.

Additionally, a chest disease specialist, Muhammad Al Tarawneh, said that it was unfortunate to see such gatherings in the Jerash Festival, stressing that there are no guarantees that a new coronavirus wave will not occur in Jordan.

Al Tarawneh pointed out that the scenes at the Jerash Festival are very disturbing, and a healthy protocol must be developed to deal with the festival because such gatherings led to a setback in many countries around the world.

The specialist stressed that the Festival should have appeared in a better and a more disciplined manner.