Opinion: The day Jordan’s fear of leftist politics was solidified

Smoke rises in Amman during clashes between the Jordanian army and fedayeen. (Photo Source: Jordanian archives) 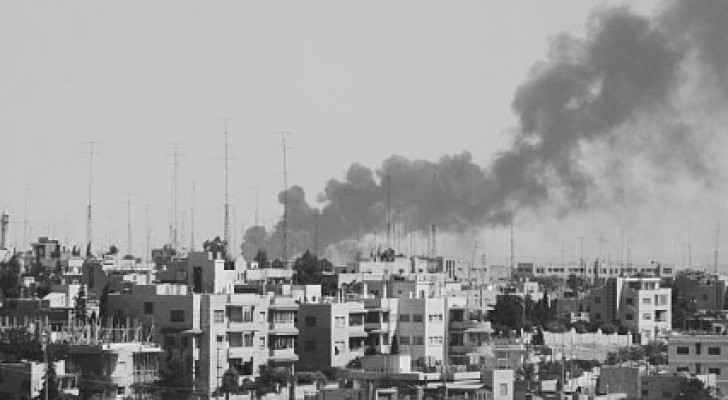 Black September has left a legacy of left-wing apprehension on Jordanian political thought.
Easily one of the most sensitive political topics in the Kingdom, it is curious how a pre-existing compatibility between Islamic and left-wing schools of thought was, and continues to be, compromised by the events of this crucial moment in Jordan’s history.

In brief summary, Black September was a period of escalating conflict between the Jordanian Armed Forces under HM King Hussein, and the Palestine Liberation Organization under Yasser Arafat, fought between the 16th and 27th of September 1970, with some continued hostility until July of 1971. After Jordan lost control of the West Bank, Palestinian military forces were based in Jordan gaining wide support from across the Arab world in the struggle against Israeli expansion. However, they began increasing in strength and number, operating as a “state within a state” inside Jordan, to the extent of compromising the Jordanian monarchy’s hold on power.

Jordan was smacked right in the middle of the Arab Cold War. Although Arab states were (formally) unaligned between the Soviet and American-blocs, ideological trajectories were polarizing between nationalist socialism and traditionalist monarchies. Between Ba’athist Syria and Iraq, and Abdel Nasser’s support for the PLO, the Jordanian monarchy was understandably grappling with its hold on power. Indeed, some veterans fighting on behalf of the monarchy claim that Vietnamese soldiers were also acting in opposition, back when the North Vietnamese government was a communist state. Given this context, it is perfectly understandable why the Jordanian political identity is so averse to communism, socialism and broadly speaking any form of left-wing ideology.

Jordan witnessed a series of shifting alliances and multiple parties, with the Jordanian government under King Hussein and several Palestinian armed groups stationed in the country at its crux. After a Palestinian exodus when Jordan ceased its annexation of Palestine in the aftermath of the Six-Day War, and an alleged coup on behalf of the National Socialist Party - Jordan’s first, last, and only elected government, it is no wonder both the Jordanian government and people have become averse to socialism.

Aversion to socialism, however, is ironic as socialism and Islam are highly compatible.

Jordan is a Muslim-majority country, making it somewhat of an oxymoron to have it so strongly oriented towards right-wing parties. Two key elements of Islam’s compatibility with Socialism are exemplified via the concepts of “zakat” and the “waqf”. Islam emphasized the concept of redistribution of wealth, placing “zakat” as one of the five pillars of Islam. Whereas socialism advocates for a more egalitarian society, in which wealth is redistributed from the rich to improve the lives of the poor, zakat calls for a fixed percentage of wealth to be allocated to the poor, although in Jordan zakat is purely voluntary.

The “waqf” system, in the same light, is highly socialist (historically anarchist, even) in principle. In Islamic law, a waqf is a charitable endowment involving the donation, building or provision of private Muslim assets for specifically defined trustees to benefit members of the community. A waqf can be a plot of land to build a school or hospital, or funds for such institutions in their provision of social services, though it has a flexible nature corresponding to the donor’s wishes. Jordan’s Ministry of Awqaf and Islamic Affairs currently manages the awqaf sector, among other facets of religious Jordanian society, providing an example of how Jordan has the infrastructure to support Islam’s socialist-compatible ideals. However, the problem of a lacking leftist narrative in politics goes far beyond ideological compatibility and political legacy of Black September.

Why we have no strong representation of a left-wing Islamist party also goes to Jordanian political parties’ lackluster methods of operation, and bureaucratic limitations set by the government. Effectively speaking, Jordan has no Liberal-Islamist, Socialist Islamist, or prominent left-wing political parties. Jordan only has far-right Islamist parties promoting a single narrative of their interpretation of Islam.

The Jordanian government’s main opposition happens to be splinters of the Muslim Brotherhood, namely the far-right Islamic Action Front, which is highly conservative in their Islamist principles. The Islamic Action Front is unique in its adoption of political strategies by virtue of two things: (1) actually campaigning for policies it wishes to implement should it be allocated seats in Jordanian Parliament, and (2) using its “Islamic” nature as a banner to rally the Jordanian public under the pretense of promoting Islamic values. Indeed, the prevalence of conservative Islamist parties is such that the competitive nature between them results in the IAF’s preaching of further conservatism. Considering a lack of financial endowment, fear-mongering and appealing to a conservative base is a way of differentiating the Islamic Action Front from other “Islamic” parties. This, therefore, means that Jordan’s political parties fail on the account of campaigning for policy, which is fitting for Jordan’s clan-based sociopolitical atmosphere.

Jordan is thus, once again is centered in a Cold War that is more internal than external. On one end of the spectrum, there is the Islamic Action Front which is leaning even further right, with the likes of Dima Tahboub operating under a moral compass pointing south, and on the left is a mix of individual secularists such as Zuleikha Abu Risheh or Hind Al Fayez, who lack any substantive effect on government policy due to inexistence and lack of coordination as a political party.

Black September, thus, has not only left Jordan with an aversion to leftist politics, but the present political climate may very well escalate to armed struggle should coordinated right-wing parties remain unchallenged. The question, therefore, is that if coordinating the left under an Islamic banner is successful due to ideological compatibility between socialism and Islam….where are Jordan’s leftist Islamist parties?

The Islamic Action Front rejects the ....