Socotra is revered for its "alien landscapes", including its famous dragon blood trees. (Photo Credit: GETTY) 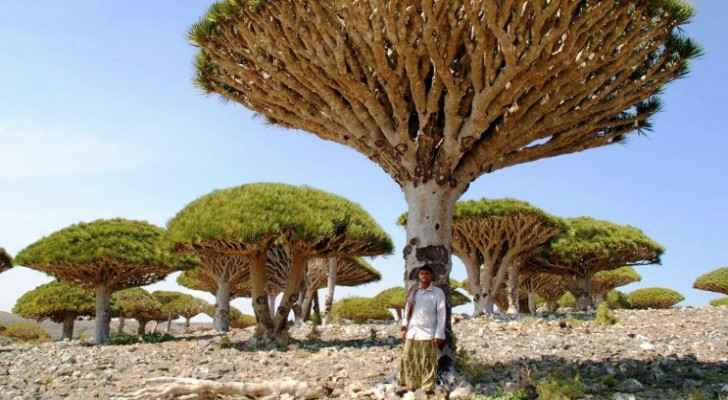 Some reports suggest that the United Arab Emirates is illegaly administering Yemen's islands, with recent cotroversies surrounding the UAE's "colonization" of the island of Socotra.

The Saudi-coalition on the war against the Houthi insurgency includes Emirati forces, and is heavily criticized for committing indiscriminant attacks against Yemeni civilians, including the launch of airstrikes on hospitals.

Socotra, an island 300km off the coast of Yemen in the Gulf of Aden, is a UNESCO world heritage site known for its unique biodiversity, containing species of plants and animals that can be found nowhere else in the world.

The island, which is believed to look the same as it had 20 million years ago, is being compromised by UAE expansion.

The UAE confirmed in May that it is using the island as a military base in the war on Yemen, with a strenuous relationship with Yemen's internationally recognized government run by President Abdrabbuh Mansur Hadi.

It also occupies the island of Perim, which was previously under control of the Houthi rebels. Friction with Hadi's government however, remains uncertain as some reports suggest that Hadi leased Socotra and nearby Abd al-Kuri island to the UAE for 99 years before fleeing the country for Riyadh in 2014.

Critics believe that although the UAE is provided humanitarian aid to the island, the strategy is used to give the UAE a stronger hand in the island's administration.

Some reports suggest that UAE officials have been paying local authorities in exchange for a lenient approach to their development plans, angering Yemeni authorities.

"Very large [swathes of] land have been occupied by the Emiratis. This is a violation of the laws of the state, the protectorates and the protection of the coast," said an official from Socotra's Environment Agency.

Indeed, the de facto government capital of Aden has a diminishing hold on the souther parts of the country, which encourages the UAE's aggressive expansionism leading to a depletion of Socotra's natural and cultural heritage.