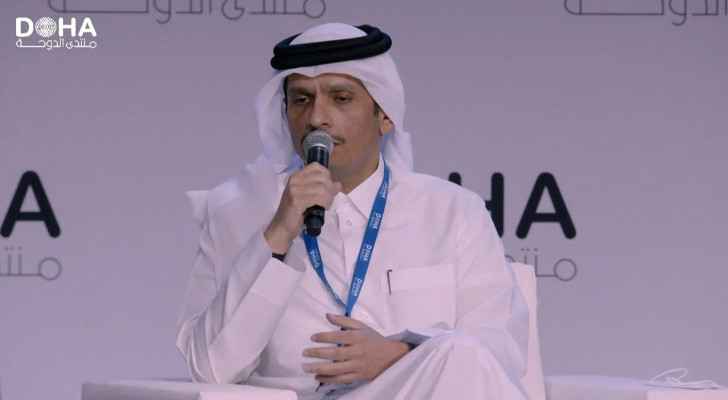 Qatar's Foreign Minister Sheikh Mohammed bin Abdulrahman Al Thani said Saturday that there has not been a "global response" to people's sufferings in the region when discussing the Ukrainian humanitarian crisis and the international response to it during the Doha Forum.

"Probably I will be maybe off the diplomatic talking points here but the humanitarian suffering that we have seen in Ukraine, and everyone is talking about it right now, it has been the suffering of a lot of countries in this region for years and nothing happened," he said.

He added, "We have never seen a global response to address those sufferings and we've been calling for this and that setting a precedent in the region by witnessing the brutality against the Syrian people, or against the Palestinians or against the Libyans or against the Iraqis or against the Afghans, without having a proper response globally to these kinds of actions, and without holding those people who committed these actions accountable, we are going to see more and more expansion of such a behavior."

"I hope that what's happening for us right now and what we have seen between Russia and Ukraine can be addressed diplomatically. To be addressed in a way that putting an end for this conflict, putting an end for the humanitarian suffering, but I hope this will also will be a wake up call for everyone in the international community, to look at our region and to address the issues that are happening in our region with the same level of commitment that we have seen between Russia and Ukraine."