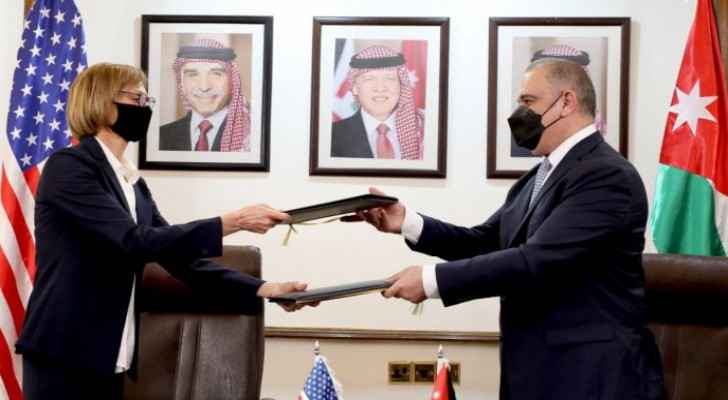 The Ministry of Planning and International Cooperation announced Jordan and the US on Saturday signed an agreement, under which Washington will transfer the first batch of the US grant for direct cash support to Jordan's Treasury worth USD 600 million, which will contribute to financing development priority projects and support economic recovery.

The agreement, which was signed prior to the official visit of His Majesty King Abdullah II to Washington, by Minister of Planning and International Cooperation, Nasser Shraideh, representing the Jordanian government, and Director of the US Agency for International Development (USAID), Sherry Carlin.

The first installment of the 2021 US cash grant, totaling USD 845 million, comes as part of the US Economic Assistance Program for the Jordanian government for 2021.

Speaking during the signing ceremony, Shraideh stressed that the early transfer of the cash support grant to the Treasury reflects the "high" level of the Jordan-US relations and their "strategic" partnership.

The US grant, he said, also comes in appreciation of His Majesty King Abdullah II's efforts in enabling and consolidating cooperation with the United States, as this support had a "clear" impact on Jordan's development process in various sectors.

The grant, he noted, will contribute to supporting priority development projects in the sectors of public finance, water, education, health, public works, housing, energy, mineral wealth, local administration, tourism, antiquities and youth, which will contribute to reducing the general budget deficit and support the government's plans to start economic recovery.

The minister expected that the second batch, amounting to USD 245 million, of the grant value would be transferred to the Treasury account before the end of 2020.

The minister expressed the Jordanian government's thanks and appreciation to the United States government for the continuous and increasing support provided to Jordan, saying that the support "reflects the high level reached by the relations between the two sides, and the strategic partnership that governs these ties," stressing that this support had a "clear" impact on Jordan's development in various sectors.

The minister also commended the United States’ contribution of USD 40 million to support the sustainability programme, "Estidama," launched by the Jordanian government to maintain employment stability during the pandemic and support private sector businesses during the economic downturn.

In addition, the United States established a multi-donor fund that raised more than USD 100 million to enhance the emergency cash assistance provided by the National Aid Fund (NAF) for the most vulnerable populations in the Kingdom, he noted.

For her part, Carlin said: "The early transfer of the Direct Cash Support grant reflects the continued commitment of the government and people of the United States to helping Jordan's government achieve a stable and prosperous future for the people of Jordan."

"Jordan and the United States are working hand in hand to combat the COVID-19 pandemic and advance Jordan's economic recovery," she added.

The grant is part of the current five-year US commitment, which builds on the decades-old partnership between Jordan and the US to support economic stability, advance democratic governance, and improve basic services for the Jordanian people, according to a ministry statement.

The USD 845 million grant is part of the USD 1.5 billion Congress allocated to Jordan in the US budget for fiscal year 2021.

The total economic and military assistance that the United States is expected to provide to the Kingdom during 2021 will amount to about USD 1.65 billion, with economic aids amounting to about USD 1.12 billion, of which Usd 845 million were provided as direct cash support to the Treasury.

The story behind THAT Hebrew banner in ....