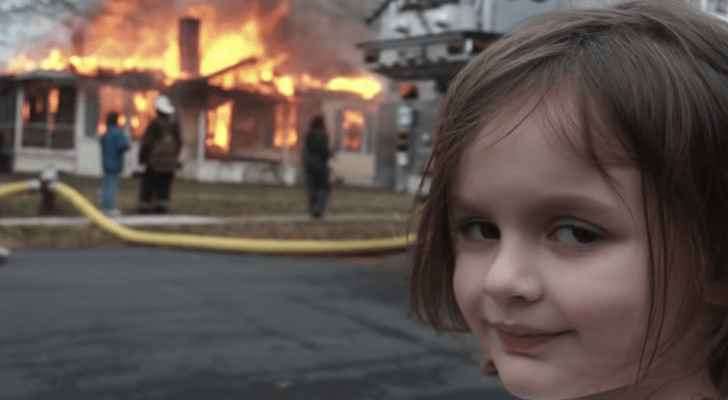 The name Zoë Roth may not ring any bells, however a picture of her as a four year old might.

The woman whose picture went viral in the 2005 'Disaster Girl' meme, Roth, sold the original photo earlier this month for $473,000, in the latest sale to the cryptocurrency-linked, digital image non-fungible token (NFT) which is taking the market by storm.

NFTs have been making headlines as many creators join the hype to profit from it amid the rush to mint, sell, and trade these NFTs among art enthusiasts.

Blockchain Technology Expert Ahmad Sharkatly told Roya that NFTs are "a type of cryptocurrency...unique tokens used to represent title deeds to digital or real world assets, these deeds are built on, backed up and secured by blockchain technology."

The original image, which later became a commonly used internet meme, was taken of Roth, a mere child, by her father in front of a burning house in North Carolina.

Firefighters intentionally set the house on fire in a controlled setting.

Her father, a photographer, asked her to smile, and with her slight smirk and messy hair with a fire roaring in the background, the meme was born.

Roth, who is now at university, sold the original image through Ben Lashes, a NFT entrepreneur who has collected close to $2 million in sales including other famous memes such as David After Dentist, Doge, and Nyan Cat.

Roth told the New York Times that she plans to use the money to pay off her student debt and to donate to charity.

"The internet is big. Whether you're having a good experience or a bad experience, you kind of just have to make the most of it," she said.

The sale price of the meme was 180 Ethereum, a form of cryptocurrency, at a auction April 17 to a Dubai-based user identified as @3FMusic on social media.

Ethereum's value fluctuates constantly, as does any currency, but as of Thursday, 180 Ether was valued at more than $495,000. The Roth family has retained the copyright and will receive 10 percent of all future sales.