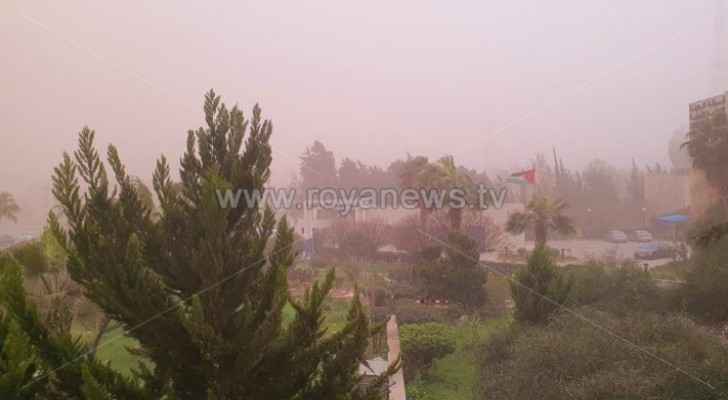 A dust storm has started to hit various parts of Amman, as a fourth-degree weather depression is hitting the Kingdom today.

Several roads in Amman are witnessing low visibility due to heavy dust that is accompanied by eastern strong winds.

The Kingdom and the surrounding region will be affected by the weather depression, which is centered between the Palestinian coast and the north of Egypt.

Arabia Weather issued several recommendations to deal with the forecast.

Some of these alerts include:

- The intensity of the Eastern wind and the accompanied gusts of wind are expected to become vigorous after the crossing of a cold high-efficiency air front on Thursday evening, as winds could reach 100 km/hour. This requires securing, fastening and immobilizing the possessions and personal properties outdoor in Amman and the main Jordanian cities.

- Heavy thunderstorms are expected in different parts of the Kingdom, including the southern regions that include the Jordan Valley, Wadi Araba, Dead Sea, and Aqaba on the nights of Thursday, Friday, and Saturday. People are urged to stay away from the low-lying areas, due to the chance of flashfloods, especially during the late hours of the night.

- The weather is expected to be dry and will gradually become dusty in most regions, in conjunction with high-speed winds and low horizontal visibility, especially in desert areas.

- The tidal waves in the Gulf of Aqaba become tumultuous with a big rise in the sea level, which could affect the Maritime navigation Thursday and Friday evening.