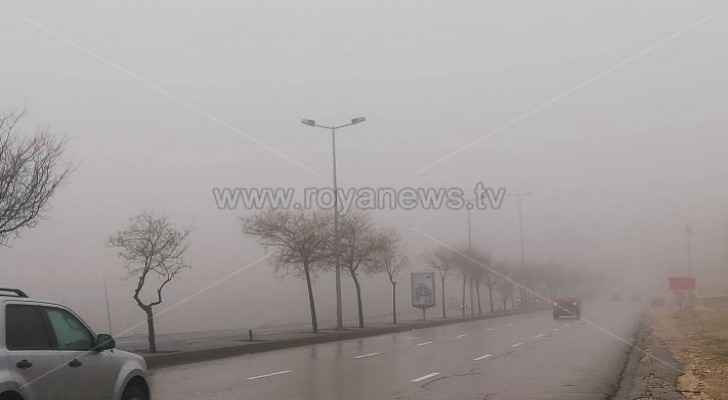 Most areas of Amman and the high areas in the south of Jordan are witnessing low visibility this morning due to fog.

The Central Traffic Department (CTD) has called on drivers to exercise utmost caution while driving, leave space between their vehicles and the other vehicles and not to drive fast.

A second-degree weather depression affected the Kingdom in the past two days, bringing heavy rainfall in most parts of the Kingdom and snowfall with accumulation in the high areas.

However, a cold air front centered over Syria is expected to hit the Kingdom this evening, setting up the chance of snowfall in some areas, according to the Jordan Meteorological Department (JMD).

Today, the weather will be cold and cloudy, with a chance of rain showers in parts of the northern and central regions of the Kingdom.

At night, the air mass will begin to affect the Kingdom, as the weather will be extremely cold and cloudy.

The northern and central regions of the Kingdom and parts of the southern regions will witness rainfall.

After midnight, rain may be heavy at times and accompanied by thunderstorms and hailstones in some areas.

Westerly moderate speed to active winds are in the forecast.

Jordan should compensate those affected by lockdowns: ....

Jordan should compensate those affected by ....

Jordan should compensate those affected by ....

Jordan should compensate those affected ....