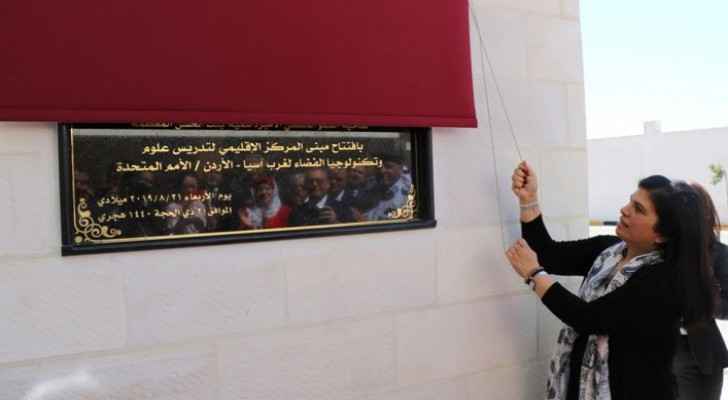 The RCSSTEAP is the first of its kind in the Kingdom and the fifth in the world.

It aims at enhancing the capabilities of people interested in the field of space science and technology in the Kingdom and the region.

Upon her arrival to the Center, HRH was received by the Director-General of the Royal Jordanian Geographic Center and Director-General of the Regional Center for Space Science Training, Brigadier General Dr. Awni Al-Khasawneh, members of the Board of Trustees of the RCSSTEAP from the Arab states and senior officials of the Royal ـJordanian Geographic Center and the RCSSTEAP.

Khasawneh talked in a speech about the RCSSTEAP’s scientific and research role, suggesting that the Center will offer academic programs in the field of space science, meteorology, space communications, weather, and atmospheric sciences. In addition, offering short, medium and long-term training courses in these fields.

For his part, Dr. Mohammed Nasser Al Ahbabi, the Director-General of the United Arab Emirates (UAE) Space Agency confirmed the strong relations between the UAE Agency and the RCSSTEAP through the agreement which indicated that the UAE will become a member of the RCSSTEAP.

Ahbabi pointed out that the UAE seeks to be a regional center in the projects related to space exploration and education and human capacity development related to this field.

However, President of the Arab Union of Astronomy, Humaid Nuaimy highlighted the importance of the RCSSTEAP at the regional and international levels, stressing the necessity of cooperation among Arab countries for the success of the Center.

Nuaimy thanked Jordan for the establishment of the Center, which embodies the global partnership in space exploration.

The Romanian cosmonaut, Dumitru Prunariu spoke about his journey in space in 1981 aboard Salute 6 space station.

Prunariu also shared a number of scientfic experiences he had during his six-day journey.

People wishing to study such fields will be sent to Arab countries, where the courses will be taught in Arabic.

HRH Princess Sumaya also inaugurated an exhibition for Aerial photography, surveying instruments, telescopes, and meteorology.
The exhibition was held in cooperation with a number of local, regional and international specialized companies.

At the end of the opening, HRH presented commemorative shields to a number of figures specialized in space and astronomy from Arab and foreign countries and toured the Center to check on its facilities and modern equipment.

The opening ceremony was attended by a number of senior civilian and military officials and a number of heads of departments and bodies working in space organizations from around the world.