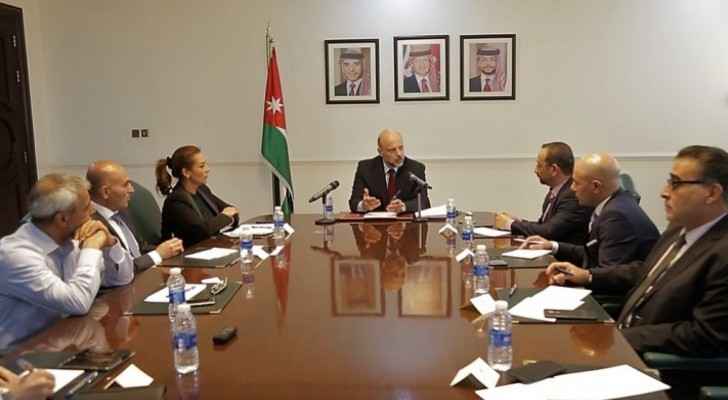 During a meeting with news directors on local TV stations, Prime Minister Omar Razzaz confirmed that the government is continuing to implement His Majesty King Abdullah II's directives in several projects and programs aimed at achieving the self-reliance approach."

Razzaz stressed that the government is working from the first day of its formation to improve services provided in various sectors, especially education, employment, health and transport, through procedures and commitments implemented to be reflected positively and directly on the living standard of citizens.

"Justice and equal opportunity are our top priority, as well as reducing the gap in services in vital sectors, with the aim of improving the quality and enhance confidence and standardize in different regions of the Kingdom," Razzaz said.

He announced new government procedures and commitments that will be implemented during the third and fourth quarters of this year, thus achieving an integrated system of quality and equal service in the four sectors.

PM Razzaz revealed a series of important directions in the education sector, foremost of which is the achievement of the compulsory early education in kindergartens at all schools of the Kingdom by 2020.

At the level of education, Razzaz pointed to measures taken by the Ministry of Education to ensure the quality of education, raise the efficiency of teachers, provide training for them, develop curricula and use technology in education.

Regarding higher education, Razzaz said, "despite the recent concerns, I emphasize that it is fine, and we always seek to improve its outputs and provide a scientific methodology for measuring quality that is accessible to students and parents."

With regard to the health sector, he referred to the government's intention to improve the level of medical care services in health centers and to ease the pressure on hospitals.

In the meeting, Razzaz also tackled a wide range of local-related issues, including the comprehensive health insurance, prices of medicines, employment policies, public transport and the importance of maintaining dialogue and communication with media outlets and their role to inform citizens about government policies and procedures.