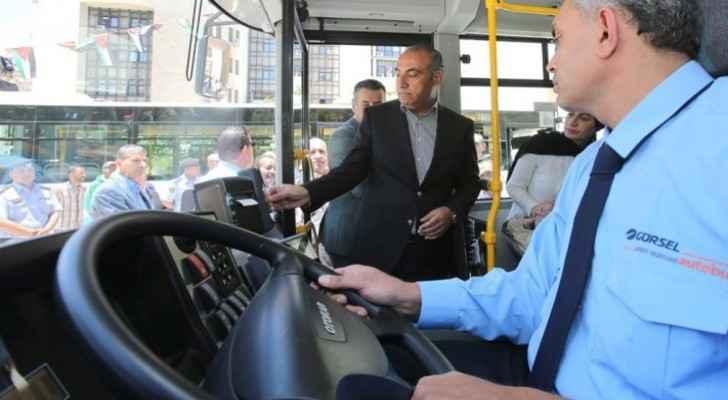 Amman's Mayor, Yousef Al Shawarbeh has announced the launch of "Amman Bus" project, which will be put into operation as of next Sunday, June 30, 2019.

During the project's first phase, around 135 transport buses will operate and cover 55 destinations across 23 routes, at a cost of JD 18 million, Shwarabeh said during a press release on Saturday, June 22, 2019.

Modern means of payment will be offered, as people will be able to buy prepaid rechargeable cards which can be obtained from the different points of sale.

During the project's first phase, buses will be transporting citizens from and to 11 areas out of a total of 22 in Amman, including King Hussein Sports City, Abdali, Basman, Tariq, Abu Nsair, Shafa Badran, Sweileh, Jubaiha, Tlaa Al Ali, Al Nasr and Marka.

According to the expansion plans, new buses will be added and equipped through international tenders to secure operating 150 new buses by the end of 2020 with a maximum of 34 new routes.

The "Amman bus" will be regular, cover the main areas of Amman, including downtown and east and north of Amman, will operate at a rate of 16 hours per day from 6 am to 10 pm and will partially operate during holidays.

During the first month of the project, citizens will be able to buy the rechargeable cards at a cost of JDs 2, charged with a credit of JD 1, where the cost of a single trip will be only one penny.

Those cards can be recharged from the main bus stations including Al Mahattah complex, Al Shamal complex, University of Jordan, Sweileh Circle, the World Islamic Sciences and Education University and other stations that will be added later.

The new bus stops will feature electronic visual displays to make the buses' arrival times and routes visible to people. This feature will be added during next August.

About 55 bus stops and 33 stations have been implemented for passengers to board or alight from a bus and were designed to be easily used by people with disabilities and special needs.

Mayor of Amman inspects ongoing projects in the capital