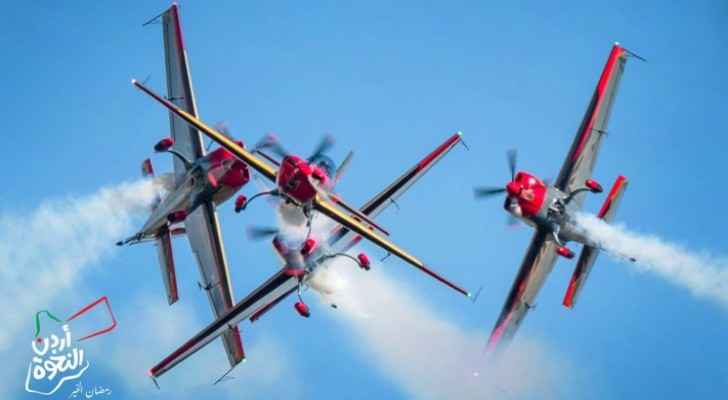 The Royal Jordanian Falcons will fly over the Kingdom's sky in celebration of Jordan's 73rd independence anniversary which will take place on Saturday, May 25, 2019.

People all over the country will be able to enjoy the spectacular air show of the Falcons and will have the chance to take pictures, where the aircrafts will parade in the sky and create a great air show which reflects the competence of the Jordanian pilots and their rejoice over this national occasion.

As of 12 pm and until 1 pm, on Thursday, the aircraft will fly over Karak, Ma'an, Tafilah, and Shobak, painting the sky with colored smoke.

The show will last until Saturday, where the aircraft will be flying over Irbid, Jerash, Ajloun, Mafraq, Amman and the cities of Ramtha and Salt.

The parade will conclude next Sunday with the Royal Jordanian Falcons touring through Karak, Tafilah, Shobak, and Aqaba from 9 am to 10 am.

As part of the Kingdom's Independence Day celebrations, the Jordanian campaign entitled "@UrdunNakhwa," will launch many interactive activities with Jordanians through social media platforms.

The Royal Jordanian Falcons was established 43 years ago under a royal decree by His late Majesty King Al Hussein Bin Talal and remained under royal patronage for its development and expertise in all fields.

This support was crowned by His Majesty King Abdullah II, where he ordered to transfer the Royal Jordanian Falcons to the Special Economic Zone Authority in Aqaba at King Hussein International Airport, in order to contribute to the promotion of Aqaba and Jordan tourism.