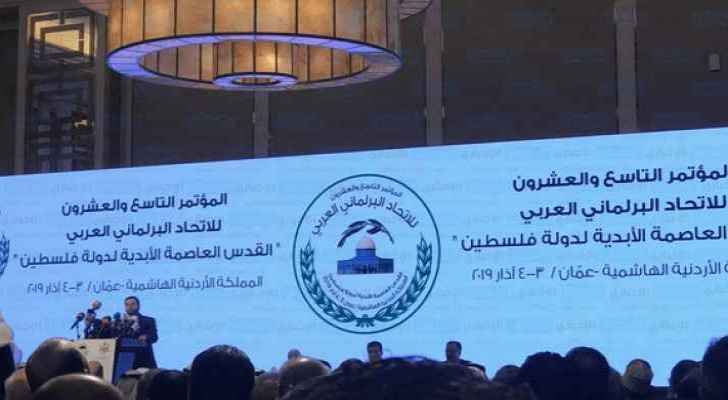 "The Hashemite Kingdom of Jordan hosted the 29th Conference of the Arab Inter-Parliamentary Union (APU) on Monday, March 4, 2019, in the spirit of brotherhood and love, which prevailed the preparatory and consultative meetings, through to the meetings of the chairpersons and the subcommittees, until the moments of drafting the final statement; with the Palestinian issue on top of the agendas, and the united positions behind the slogan "Jerusalem is the capital of the Palestinian state."

Jordan is keen to keep the house of Arab consensus, through a history of embracing Arab meetings at all levels, and pledging to complete the joint Arab tracks of action in restoring momentum to the values of solidarity and cohesion among the Arab peoples.

Jordan will always remain at the forefront of every effort to support the central cause of the Arab and Islamic nations which is the Palestinian cause. The Kingdom will not stop exerting any efforts in the interest of our Palestinian brothers, and end it with the declaration of the establishment of a Palestinian state with full sovereignty and dignity on its national soil.

In this regard, we affirm that any solutions that go beyond the resolutions of international legitimacy and the frameworks of the Arab Peace Initiative, which provide for a two-state solution and a just negotiation to the final status of the refugees, of Jerusalem, of water and borders, are not viable solutions, especially under the injustice which the Palestinian brothers have been suffering for more than seventy years.

We warn against any attempts to undermine the historical and legal status of Jerusalem and its holy places, as well as the attempts to obliterate the identity of the Holy City, and Israel’s unilateral actions, which represent ongoing violations and a serious escalation.

Jordan and the Hashemite custodianship of Islamic and Christian holy sites in Jerusalem will continue its role to take care of the Holy City. This is one of the tenets which the Kingdom will not deviate from in order to support the steadfastness of the Jerusalemites, and protect the first of the two Qiblas, the third of the two Holy Mosques, the place of journey of the Prophet Peace be upon him, and the birth of Jesus Christ; and to put an end to the continuous Israeli violations in this city which must be a city of peace and harmony.

The steps taken by King Abdullah II, and the rapid moves he has made have had the effect of stopping the repeated Israeli aggressions on Al-Quds Al-Sharif, the last of which was the reopening of Bab al-Rahma to worshipers, which represented a deterrent to Israeli intransigence and its unilateral occupation. These moves serve to uphold the identity of Jerusalem as the eternal capital of Palestine, and the city’s embodiment of the values of coexistence between religions.

We in Jordan warn against the dangers of the Israeli expansionist settlement projects at the expense of Palestinian national territory. We emphasize the rejection of any attempts to impose a ‘fait accompli’. This requires a unified Arab effort to counter the Israeli attempts to confiscate more rights from the Palestinian people.

We consider that one manifestation of support for Palestinian rights is the continued support of the United Nations Relief and Works Agency for Palestine Refugees in the Near East (UNRWA), in order to continue its health and education services so that the issue of Palestinian refugees and their plight continues to put pressure on the world's nations."

Talal Abu-Ghazaleh selected among the most influential ....

Talal Abu-Ghazaleh selected among the most ....

Talal Abu-Ghazaleh selected among the most ....

Talal Abu-Ghazaleh selected among the ....