Swarm of hundreds of thousands of locusts could head up the Red Sea coast towards Egypt or cross the water for Saudi Arabia and UAE. (Getty Images) 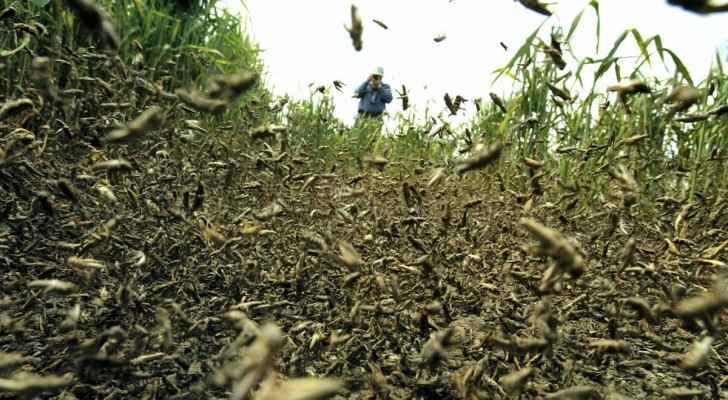 The Food and Agriculture Organization of the United Nations (FAO) said that the locust swarms that have spread in Sudan and Eritrea are growing rapidly along the Red Sea of Saudi Arabia and Egypt in a potential crop and food threat, adding that it the FAO will hold a meeting in Jordan next week to discuss intensifying control measures with the affected countries.

"Good rains along the Red Sea coastal plains in Eritrea and Sudan have allowed two generations of breeding since October, leading to a substantial increase in locust populations and the formation of highly mobile swarms.”
At least one swarm crossed into Saudi Arabia's northern coast in mid-January, followed by other flocks a week later.

The rains associated with two storms over the past year have spawned locusts in Saudi Arabia’s Empty Quarter near the border with Yemen and Oman, and few swarms have reached the UAE and southern Iran.

The organization's statement warned of the danger of its possible movement towards the Indo-Pakistan border.

"The next three months will be critical to bringing the locust situation under control before the summer breeding starts," said Keith Cressman, the FAO's senior locust forecasting officer.
"The further spread of the current outbreak depends on two major factors – effective control and monitoring measures in locust breeding areas of Sudan, Eritrea and Saudi Arabia and the surrounding countries, and rainfall intensity between March and May along both sides of the Red Sea and in the interior of the Arabian Peninsula."
FAO said control operations had treated 200,000 feddans since December, including about 74,000 feddans in the last two weeks in Egypt, Eritrea, Saudi Arabia and Sudan.

Counter-measures were also put in place in Iran after at least one swarm reached the southern coast at the end of January.

Locust swarms can fly up to 150 kilometers in the direction of the wind, and adult insects can eat fresh food almost on a daily bases. A very small swarm per day consumes enough to feed 35,000 people, posing a devastating crop and food threat.

Cressman said the last major locust outbreak occurred between 2003 and 2005 when more than 29 million acres faced threats in West and Northwest Africa at a cost of about $ 750 million, including the food aid.

Since then, there have been multiple outbreaks along the coastal plains on both sides of the Red Sea, but most have been met with countermeasures.

Government meeting with army and security services in ....

Government meeting with army and security ....

Government meeting with army and security ....

Government meeting with army and ....