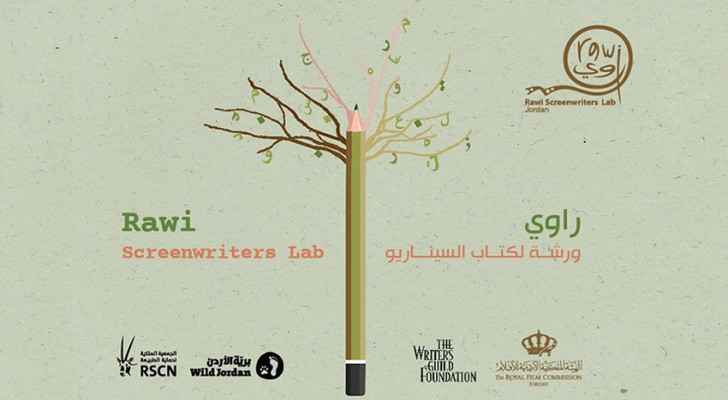 Every year, Rawi Screenwriters’ Lab takes in the best emerging film writers of the region to help them achieve one goal: take their script to the next level.

Rawi, which means “storyteller” in Arabic, is a regional workshop created, organized and hosted in Jordan by the Royal Film Commission (RFC).

The talented participants are offered a unique opportunity to introduce, discuss and re-evaluate their screenplay under the guidance of renowned filmmakers – chosen from all around the world – who will join the participants in their stay in Dana Biosphere Reserve until July 21, 2018.

During Rawi, mentors offer their professional insights and personalized tips and strategies to each of the participants in order to help them reach their best potential as writers.

In an exclusive interview with the Regional Training Manager of RFC, Ms. Areeb Zuaiter, we asked her about the mentors of the current Rawi cycle, the mechanism of choosing participants, the preparations done prior to the lab, and more.

The Royal Film Commission – Jordan has been organizing Rawi Screenwriters Lab for 14 years now. We know that this round will start on July 16, 2018 and will last for about a week. What is different about this round? And are there any things ‘like standards’ that Rawi is careful to maintain and apply every year?

There are many aspects that distinguish this round of Rawi. The 14 year-old Lab is taking place for the first time in Dana Biosphere Reserve; one of Jordan’s hidden wonders and a melting pot for unique natural and inspirational resources. In addition, it is the first time that the Lab receives such generous and attentive support from the Writers Guild Foundation. The Writers Guild have contributed huge efforts that helped Rawi attract highly experienced and award-winning advisors who reside in the US. Is there any Screenwriting workshops similar to Rawi in the region? What makes Rawi this important?

Rawi is so unique compared to the other multiple Screenwriters Labs that cater for the region. What makes Rawi special is that it mainly rotates around its fellows and the needs of their screenplays. As a matter of fact, Rawi allows its fellows to choose from the list of advisors that is announced for the round. It exposes its fellows to multiple viewpoints relevant to their work from all over the world. Each fellow will be mentored by four different advisors through an intensive one-on-one session.

Last but not least, unlike many other writing labs, Rawi requires that the screenplay be ready in order for its writer to be qualified for selection. This allows the writer, once admitted, to work on the core structure of his/her story. Think of it this way; Rawi helps the writer develop an almost-ready blue-print rather than an early sketch of a story-concept. Through Rawi, writers work on tangible character arches, dialogue, story arches, story background and above all structure. Bear in mind that we select various mentoring perspectives to help a screenplay out. This means that, in Rawi, each selected screenplay counts; regardless of the genre and the structure it adopts.

About the location of Rawi this year, which is also intriguing. Tell us please about the importance of having Rawi conducted outside the city? In a rural place like Dana Biosphere Reserve?

The Lab this year takes place in Dana Biosphere Reserve; a remote serene space that fosters creativity and infuses inspiration. During their 5-day involvement, the participants are not allowed to touch their screenplay. However, they will discuss, brainstorm and breakdown the various aspects of their story; its background and its structure. This carefully selected location will allow them to thoroughly think about their screenplays in a writer-friendly and a stimulating environment.

Why is Rawi an English-based lab? Do you have any future plans to make an Arabic adaptation of the program?

Rawi, is so careful in adopting a wise geographical balance when inviting its advisors. Therefore, each year, creative advisors support the Lab from various areas around the world. Of course, the common language between those advisors and the Arab fellows is English. Yet, we are keen on not excluding non-English speakers from this important program. Hence we are providing translation to those who need it. Likewise, during the selection process, in addition to having various Arab committee members, we do have members from around the world. For example, this year, Rawi’s selection committee consisted of members from Europe, Latin American and the US. For those committee members to be able to assess the various submission we received, they had to read the screenplay in English. It is worth mentioning here that we initially accept screenplays in Arabic and we request the English versions at later stages of selection.

Moreover, RAWI is open to Arab screenwriters residing in the Arab World and beyond. And since there is a wide array of dialects within the region and its diaspora, again, English as a global language is ideal for communication.

We have to also remember that, when first inaugurated, Rawi was run in collaboration with Sundance Institute and is modeled after its renowned lab. This also contributes to the usage of the English language in specific.

We do have an idea of launching a Jordanian version of Rawi. Yet the idea is still brewing and will take a decent amount of preparations and planning for it to be realized. And for that, Arabic should be the common language.

Can you tell us about successful stories of people who enrolled in Rawi in the past and made it big in the film-industry? Any familiar names that we know of? Part of Rawi’s regional success amongst the community of filmmakers and screenplay writers is the fact that it had led to the realization of many powerful films and the empowerment of many effective voices from all over the Arab World. Over the past years, Rawi has become a globally celebrated program setting the stage for many successful authors and their work. The Lab had supported over ninety six emerging screenwriters most of which had made their way to the silver screen.

Najwa Najjar’s Pomegrante and Myrhh; Cherien Dabis’s Amreeka; Mohammed Al Daraji’s Son of Babylon; Rola Nashef’s Detroit Unleaded; Selma Barghach’s The Fifth String and Sally El-Hosaini’s My Brother the Devil, Khadija Al-Salami’s I Am Nujood, Age 10 and Divorced and Yasmine Chouikh’s Until the End of Time have all made their way with high acclaim to international festivals and have secured worldwide distribution. This is in addition to Rawi being the stepping stone in the Jordanian Oscar Nominee,  Naji Abu Nowar’s, career as a filmmaker. Abu Nowar, who directed Academy Award’s nominated “Theeb” and who attended the first Rawi Screenwriters’ Lab in 2005, said:  “Rawi changed my life. The advisors in the lab opened my eyes to the craft of screenwriting in a way that fundamentally changed my approach to the art form; both professionally and personally. If we want to build a healthy prosperous Middle East film industry, it must start with the screenwriters. Rawi is an important initiative in that respect. I am proud to be a Rawi Alumni and I am dedicated to supporting the future of the Lab and the next generations of Fellows."

On what bases do you choose the participants?

Once we open a call we list all the requirements that we would need from the applicant to submit. The selection process we usually go through accordingly is a demanding one. Since Rawi is one of the highly competitive regional programs we run here through the RFC, it receives a great amount of applications. We start by logging in all the complete applications and following up with the lacking ones so as to encourage them to complete their requirements before the deadline.

We also assign five committee members to evaluate and assess the submitted screenplays. This year, our committee were from the Arab World, Europe, Latin America and the US. Each read 5 screenplays every week and provide written feedback and assessment to the screenplays they have read. Moreover, we conduct weekly calls where we analyze the feedback and discuss the assessment. The process goes on to the elimination stage, until we reach 15 short listed Arab candidates.  We conduct interviews with those shortlisted candidates and choose our 8 fellows accordingly.

How many participants do you host this year? What countries are they from?

We have 8 Rawi Fellows and one Debut Feature Film Program Fellow. They are: “Like Salt” by Darine Hotait (Lebanon); “Ayesh (Alive)” by Haitham Dabbour (Egypt); “I’ll Go to Hell” by Ismahan Lahmar (Tunis); “Barzakh” by Laila Abbas (Palestine); “Ne’meh” by Mohannad Abu Rizk (Jordan); “Ibraham’s Journey” by Shaker Tahrer (Iraq); “Not Snow White” by Taghrid Abdel Maksoud (Egypt) and ‘’Stoning the Jasmine’’ by Zaina Deeb (Jordan). This year, the lab has also welcomed “Sharaf” by Ala’a Al-Qaisi (Jordan), an additional participation from another RFC program, the Debut Feature Film Program. About the mentors this year, what can you tell us about them?

Is there a system that Rawi follows when it comes to conducting the sessions between the participants and the mentors? Who sets the course of the lab?

Rawi is modeled after Sundance Institute’s venerable Lab. The lab has been conducted in collaboration with Sundance since its first 11 years. The Lab has matured over the years to the extent that it was able to fly on its own since 2016. Now, the lab’s structure still follows Sundance model. Yet, it is autonomously conducted by the Royal Film Commission – Jordan and its team.

Where do you see Rawi in 10 years?

Well, measuring on the continuous success and on previous achievements of the Lab, we can only see it gaining further success, embracing more talents and enabling more voices. We see it as THE incubator to the most important stories and storytellers of the Arab World. THE ROYAL FILM COMMISSION - JORDAN (RFC) was established with a vision to develop an internationally competitive Jordanian film industry. Founded in accordance with the Royal Film Commission Law No. 27 for the year 2003, approved by Law No. 22 issued by the Parliament in 2008, the RFC is a financially and administratively autonomous Jordanian public organization led by a Board of Commissioners, chaired by HRH Prince Ali Bin Al Hussein. Areeb Zuaiter is a visual storyteller who is currently fulfilling her passion in supporting regional filmmakers through her position as a Regional Training Manager at the Royal Film Commission. Areeb holds a Master’s degree in Film and Video Production from the American University (AU) in Washington, DC. During her enrollment at AU, she worked as a Technology Associate with the Associated Press; an experience that exposed her to the latest technologies in production and broadcasting. Soon after, she was rewarded a fellowship at the Smithsonian’s National Museum of American History where she produced some of the Museum’s key projects. Areeb’s thesis, “Colors of a Displaced Identity,” was nominated for Sony’s Outstanding Thesis Award in May 2014. For her undergrad, Areeb pursued a degree in Interior Architecture and another one in Communication Arts. Her graduation short “Stained” won the Jury’s price in the 10th European Film Festival. Areeb then started her production house where she worked on regional designs and corporate videos. In 2005, she documented Jordan’s participation in Aichi Exposition; Japan, in a short that was nominated in Aichi’s Friendship Film Festival. In 2006, Areeb collaborated with Abu Mahjoob, and got nominated for the animated series section in Annecy Film Festival; France.