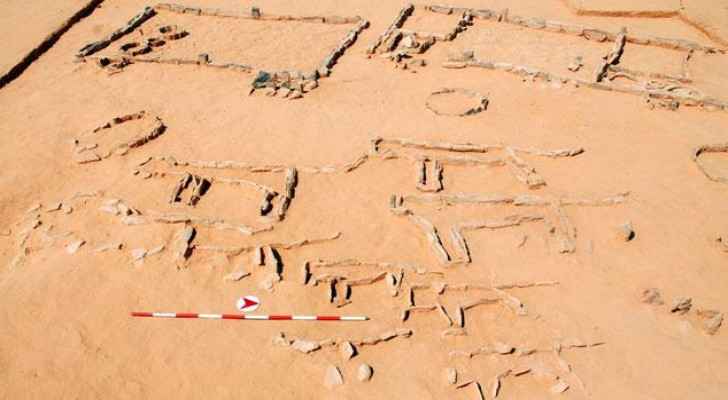 Feline petroglyphs were discovered by a team of researchers in a remote desert, 300 km south of Amman in the ‘Awja 1 site at the Jafr Basin.

‘Awja1 is a small site discovered in 2010 using clues and information from local residents.

A full-scale excavation of the site revealed structures reminiscent of late-neolithic open-air sanctuaries, which were previously excavated by the same team at Qa’ Abu Tulayha and Harrat Juhayra.

‘Awja 1 revealed four rectangular structures, but no artifacts. Japanese scholar Sumio Fujii, from Kanazawa University, stated that the site “was an open sanctuary and irrelevant to practical life.”

The archeologists were surprised to find the shape of a feline tale and began excavating to reveal seven more features.

“There is no doubt that the quadrupeds represent feline animals, probably cheetahs or panthers. This is because they have a slender trunk, a relatively small and rounded head without horns, and, among others, a long tail curling only its tip upwards,” added Fujii.

Similar feline petroglyphs, found in another Neolithic site in the Jafr Basin, suggest that the animal was important to ancient inhabitants, according to Fujii. He noted that four are adults and four juveniles.

Fujii explained that the feline images and the open-air rituals were probably used by early nomads migrating to the south of Jordan. Similar features found in the Negev Highlands and the Sinai Peninsula suggest the felines of ‘Ajwa are about 7000 years old, said Fujii.

“Though still not very well known, except for a limited number of specialists, this unexpected finding added a new page to the history of art and archaeology in Jordan. We had no choice but to backfill the features, but, needless to say, their relocation and reconstruction at an appropriate place such as the forecourt of the Jordan Museum would be more desirable,” the expert concluded.