The agricultural pond in Ajloun in February 2018. 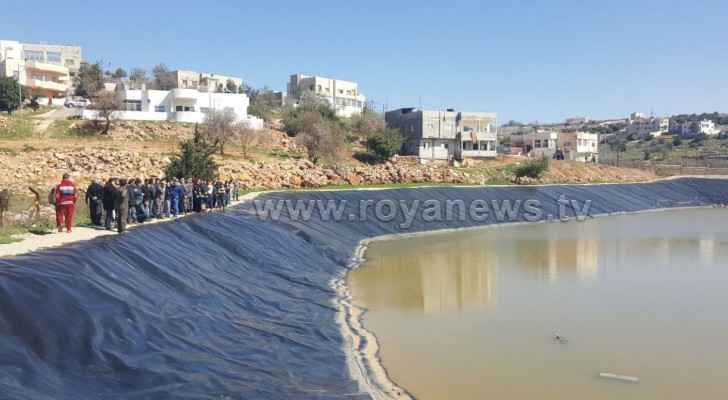 Two brothers, aged 22 and 32 respectively, were found drowned on Thursday night in the Wadi Rajel dam, security sources wrote in a statement.

The dam, which is located in the central Jordanian governorate of Zarqa, is classified as a desert dam with height of 9 meters and capacity of three million cubic meters.

The bodies of the brothers were found by diving teams and transported to the nearby Azraq military medical centre, according to the statement.

The security source claimed that the cause of death could be attributed to one of the brothers slipping and falling, while the other drowned in a failed attempt to save his brother.

The unfortunate incident has caused the information department at the Civil Defense Directorate (CDD) to issue a warning to citizens, urging them to refrain from swimming in various water sites, including dams, farm ponds, and running water streams.

The CDD also implored that in the case of an accident, individuals should call for help, rather than rush into the water in the heat of the moment.

This isn’t the first time swimming in water with no oversight has resulted in the death of Jordanians; this is the third such incident since the beginning of the year.

In the first week of May, the CDD embarked on a 24 hour rescue mission, saving one man and retrieving the body of another from the muddy waters of the Mujib dam in Madaba.

Earlier in February, two children drowned while the third was seriously injured in an agricultural pond in Ajloun.