Protesters at 4th Circle on June 5. 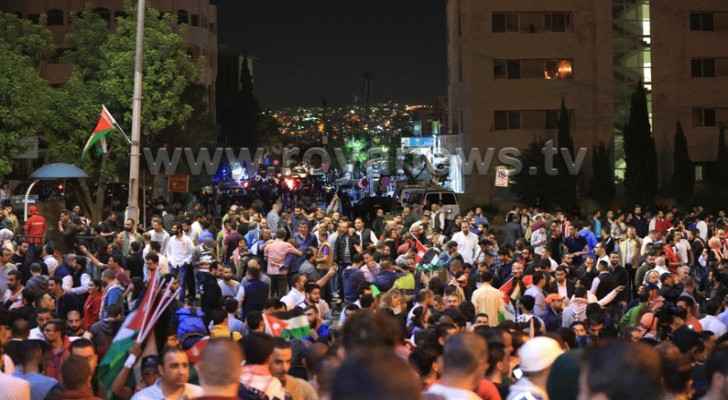 Jordan will not abandon the austerity measures prescribed by the IMF but ask for more time in order to implement them, according to an exclusive article published by Reuters on Wednesday.

The IMF is having second thoughts about the haste with which it tried to reduce Jordan’s public debt. “Pushing countries to the extreme regardless of the political environment was not the right thing. The IMF now has to take into consideration Jordan’s capacity in what it can do,”an anonymous IMF official told Reuters.

Jordan witnessed nationwide protests that were sparked by a strike organised by professional associations which lead to the temporary suspension of newly imposed taxes and price hikes and the resignation of the Cabinet.

The newly designated PM, Omar Razzaz, who was widely lauded for his work as minister of education for the past year and a half, was tasked to form a new government on Tuesday, a day after PM Hani Mulki’s resignation.

Razzaz is a Harvard graduate with a background in economics and according to his Wednesday tweet he pledges to engage in dialogue with relevant national stakeholders in order to reach a just taxation law that transcends the concept of taxation and achieves development that positively affects all citizens.

He also expressed his hopes for the relation between the government and citizens to be based on a social contract that takes into account rights and responsibilities.

“He adopts a more gradualist approach ... and is more attentive to mitigating the impact of reforms on the poor,” a former cabinet member who has worked with Razzaz and requested anonymity told Reuters.

Razzaz has yet to announce his choices for ministers but several civil institutions and political parties have called for the suspension of protests in order to give the government time to instigate change. Among them are the professional unions who launched the protests, chambers of industry and trade, and Society of the Muslim Brothers.