Jordanians protest until the early hours of Saturday

Hundreds gathered at the 4th Circle on Thursday. (Roya TV) 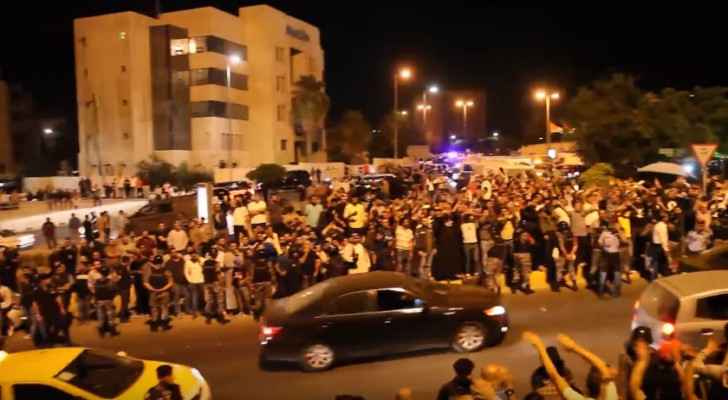 The second day of protests across cities in Jordan came to a close in the early hours of Saturday morning, Petra news agency reported citing a statement by the Public Security Directorate (PSD).

A little after 4 a.m. the last remaining demonstrators in Amman’s Fourth Circle were dispersed and prompted to go home as the approaching dawn would usher another day of the Ramadan fast.

Earlier on Friday Security forces prohibited dozens of protesters from reaching the Prime Ministry on the Fourth Circle in Amman following Friday prayers as per instructions of Amman Governor, Khaled Abu Zeid.

This lead participants to call for a 10 p.m. protest at the Fourth Circle later the same night.

Security forces prevented protestors to reach the roundabout between 8-10 p.m., which forced part of them to go in the direction of Shmeisani and others toward the Third Circle.

Traffic was heavily congested as a result and other protesters gathered in places around Amman. Protesters even impeded passage along the Airport Road.

The protests erupted after Jordan witnessed on Wednesday a cross-sector strike rejecting the government’s recent Income Tax Bill and other economic measures.

Other protests kicked off in other parts of the country as well, with Jordanians demanding the overthrowing of Prime Minister Hani Mulki’s government.

Following major protests across the country on Thursday night, which included burning tyres, His Majesty King Abdullah II ordered the government not to raise the prices of fuel and electricity for this month.

The security apparatus exhibited restraint and according to the PSD statement the protestestors were peaceful while exercising their constitutional right to demonstrate.

A 62-year-old retiree, who has a second job in order to support his family, told Roya TV reporters at the Fourth Circle on Thursday that the situation was “unbearable.”

“We are not against the government or the country but the situations is unbearable,” he explained.

While government officials are holding meetings to discuss the bill, the protests are expected to continue on Saturday night.