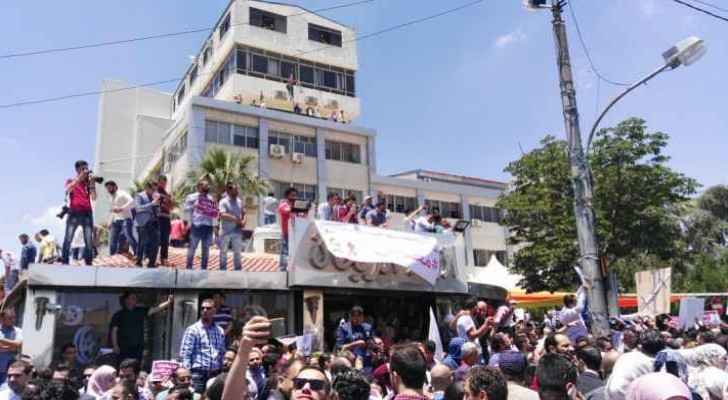 Members of unions and associations across Amman headed to the Unions’ building in Shmeisani on Wednesday noon, in accordance with the directives released by its council on Monday after PM Hani Mulki declined in a meeting to rescind the Income Tax Bill (ITB).

The general strike sweeped the nation, with shops, businesses, and publicly and privately employed professionals halting their work in order to express their rejection of the draft law.

Thousands of Jordanians filled the yard in the Unions’ building waving slogans denouncing the bill.

Even though nearby businesses were closed the roofs of adjacent structures were used by protesters to stand on and wave the large signs and placards.

The demonstrators urged the government to find ways to decrease national debt other than heavily relying on citizens’ pockets. “Strike today to live tomorrow,” was a common slogan chanted throughout the day.

Scores of lawyers also poured to the site of the protest. The General Secretary of Jordan Bar Association and member of the Unions’ Council, Khaldoun Nsour, disclosed that over 90 percent of lawyers adhered to to strike by refraining from going to court and joining the associations’ protest.

Nsour insisted that the bill was unfair and incongruous with the constitution and reaffirmed the association’s demands for its repeal.