Shops in Downtown Amman are closed in protest. 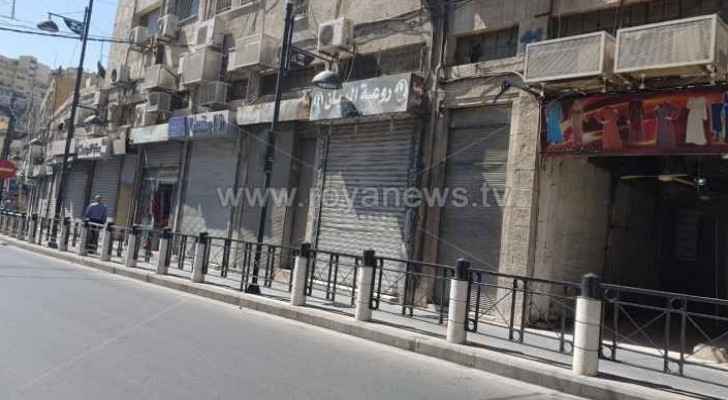 “Strike today to live tomorrow” is a widely circulated statement that graces the placards glued to closed shops, pharmacies and companies around the kingdom on Wednesday.

Private and public sector association members and independent employees are striking in response to the Unions’ Council call for a general strike on May 30 in Jordan.

The protest expresses Jordanians’ rejection of the Income Tax Bill that was recently adopted by the Cabinet and referred to the Lower House of Parliament, which is not currently in session.

Signs of the strike could be seen in the streets of Amman Downtown in the eve of the protests as placards were hanged on closed shops stating “No to the Income Tax Bill.” The same area on Wednesday can be found empty. Agricultural Engineers Association were among the first associations to denounce the ITB, and as expected, they were quick to join the mass protest in coordination with other associations and announced on Tuesday that its members in both the public and private sector would cease their operations and protest between 9 a.m. until 2 p.m.

Jordan Free Zones Investors Commission also rejected the law by encouraging affiliated workers and companies to protest in their places of work between 10 a.m. and 3 p.m. on Wednesday.

The strike was not limited to Amman, as The protest is sweeping the nation as associations, private and public sector employees joined the movement.

In the northern city of Irbid, streets in the perennially lively shopping area were left bare with signs on the closed shops indicating adherence to the mass protests. Staff in Irbid’s Princess Basma Hospital also responded to the call for protest. Pharmacies and shops in the southern city of Tafileh also read signs “In accordance to the decision of the Unions’ Council and for the sake of the country we are striking in protest of the Income Tax Bill.” Amman Chamber of Industry was the first to strike on Tuesday from 10 a.m. until noon, ahead of most of the country on Wednesday. In its extraordinary session on Saturday members of the chamber agreed to escalate their rejection of the ITB, demanding that industries received government incentives not increased taxation.

Meanwhile, Jordan Bar Association President, Mazen Irshadat, encouraged the strike and assured the association will protect demonstrators if they suffered negative repercussions from their participation.

Irshadat insisted on Tuesday that freedom of expression and the right to protest were enshrined in the constitution, adding that there were no articles in the Civil Service Regulation that outlaw a strike, a protest or not working.