Mohammad Momani during the press conference. 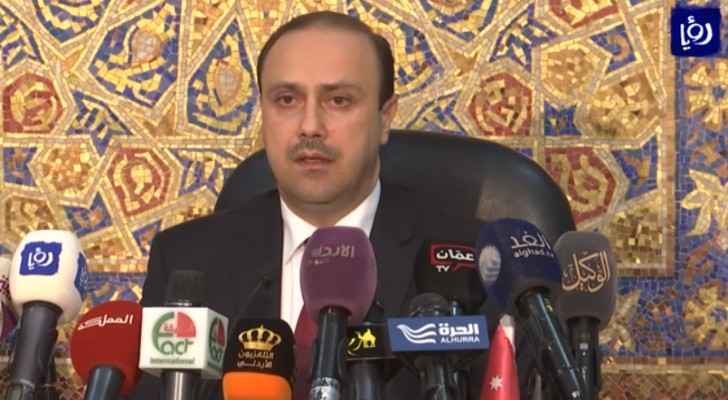 The purpose of the conference, as stated by Momani, was to present the reasons prompting the Councils of Ministers to introduce a new income tax law before it was published on the website of the Legislation and Opinion Bureau (LOB) for feedback from experts and the public.

“If this law had a title it would be ‘taxation justice’”, Momani introduced the bill, justifying the amendments as a means to curb tax evasion and uses progressive tax. “Anyone who opposes the law participates in tax evasion,” Momani added.

According to the spokesperson, under the current income tax law, 95 percent of Jordanians do not pay income tax and the bill will only affect another five percent in the kingdom.

The Minister of Finance admitted that the tax base will be increased, meaning that a greater number of people will be taxed.

Malhas explained that the bill addresses managerial procedures that will improve the government's ability to collect taxes. Among the mentioned procedures were making better use of technology, integrating information from different departments related to income and encouraging citizens to declare their taxes within the allocated time frame.

The bill also raises the penalty for tax evasion from a misdemeanor to a crime by imposing a penalty of up to 10 years in prison for tax evasion of amounts over than JD 100,000, the minister added. Additionally, the General Director of the Income and Sales Tax Department will no longer have the capacity to forgive tax evasion.

In addition to increasing the tax brackets to five, the bill lowers the first bracket to 8,000 for individuals and increases the maximum percentage to 25.

The current income tax law is also progressive and taxes individuals earning over JD 12,000 and has three brackets. The first JD 10,000 are taxed seven percent, the second JD 10,000- 14 percent and any amount over that- by 20 percent.