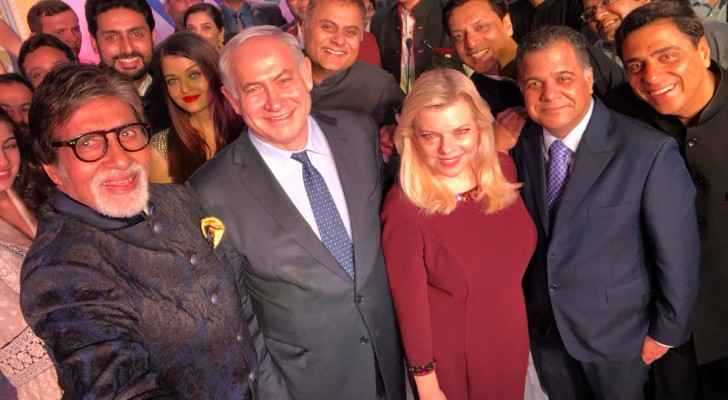 A unique ‘Shalom Bollywood’ party hosted by the Israeli Prime Minister on Thursday in the Indian capital, Mumbai, to invite Bollywood to shoot films in Israel.

"Israel offers Bollywood many opportunities with its rich history, culture, diversity and breathtaking landscape," Netanyahu wrote in the invitation.

During the evening, Netanyahu called all stars to join him for a selfie was taken by Amitabh Bachchan, “I want all the Bollywood celebrities, producers and stars to join together for a selfie. Let a few hundred million people see the friendship,” he said. It was shared by the PM on Twitter.

However, people noticed the absence of Bollywood’s khans, including Shahrukh Khan, Aamir Khan and Salman Khan, the most successful movie stars in Bollywood.

Khans humiliates Bollywood in front of the entire world, refuse to meet Israeli PM Netanyahu just because he is a Jew pic.twitter.com/HrJPqGXpEZ

Meanwhile, protests were taking place outside the event hosted in Mumbai.

On the other hand, the Boycott, Divestment and Sanctions Campaign (BDS) activists in South Asia, slammed the Israeli Prime Minister, over his visit to India.

The Head of the BDS movement in South Asia, Apoorva Gautam, said Israel's appeal to Bollywood is a symptom of a bigger "ideological shift" in the country since the election of Indian Prime Minister Narendra Modi in 2014, according to the Middle East Eye.

"These initiatives are ultimately part of a wider move by the Israelis to improve its image globally, as it continues to perpetrate war crimes against the Palestinians," Gautam said.

"The Israelis' attention has now shifted to Bollywood, as the BDS movement gains traction in America and Europe.”

"For many years Hollywood was used to depict Israel as being a free country that was democratic.

But now more and more actors and industry leaders are coming out against Israel and subverting this perception.”

"This is ultimately another form of cultural propaganda that must be condemned and stopped from taking place."

Earlier, Israel went to form such collaborations with several countries in the world, in order to improve its global image, including the Chinese cinema, after its tourist industry suffered following its assault on Gaza. And this time, Netanyahu tried to ‘woo’ the Indian cinema makers, as it one of the largest in the world and worth billions of dollars.