A symbol of resistance, Ahed Tamimi accused of 12 charges

Ahed during her Monday's hearing in the court. (Facebook: Bassem Tamimi-Ahed's Father) 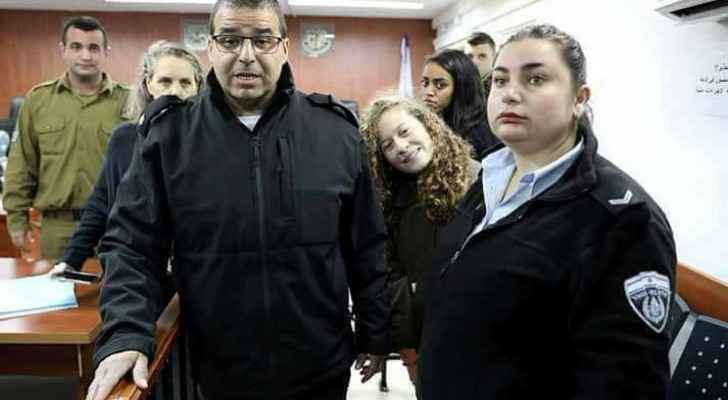 Israeli authorities charged the Palestinian 16-year-old Ahed Tamimi of 12 charges on Monday, after she was arrested by the Israeli Forces from her house in Nabi Saleh village in Ramallah early December.

The charges included assaulting Israeli officers which is related to six different incidents, stone-throwing and marking threats, Gaby Lasky, her lawyer, told journalists after Ahed’s hearing in the military court. In addition to accusations of incitement to violence against Israel.

However, Ahed and her mother, Nariman, to be detained for another 8 days until next Monday, Ahed's father, Bassem Tamimi wrote on Facebook.

Ahed was arrested early on December 19th, 2017, from her house after she appeared in a video with her 20-year-old cousin, Nour, while slapping Israeli soldiers who were trying to break into Ahed’s family home.

This is the first time for Ahed to be detained by Israeli forces, while her mother was arrested at least five times before.

Ahed Tamimi is a member of a famous activist family from Nabi Saleh Village, in Ramallah, which holds almost weekly protests against Israel, she is also known for her heroic stands against Israeli military forces.

Two years ago, a video went viral for Ahed shouting at an IDF soldier who tried to arrest her young brother. In the video, Ahed and her mother managed to take her brother away from the soldier.

Ahed became a symbol for the Palestinian resistance against occupation in Palestine and the world, after activists around the world had launched a campaign calling for her freedom.