The United Nations has expressed concern for up to 100,000 civilians it says are still trapped in the city. (Twitter) 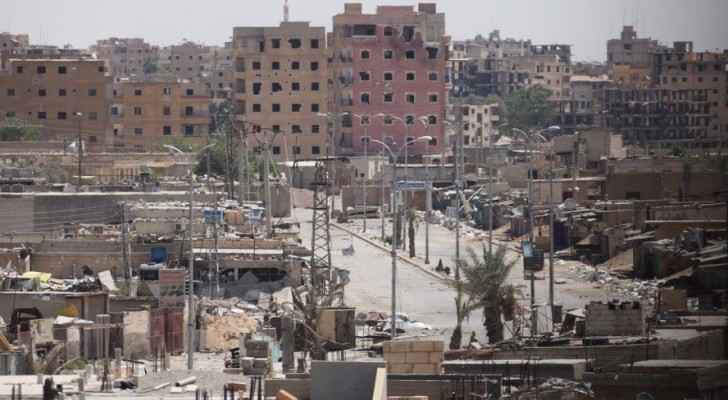 US-backed fighters pierced jihadist-held Raqqa from the south for the first time on Sunday, crossing the Euphrates River to enter a new part of the Syrian city, a monitor said.

The Syrian Democratic Forces have spent months closing in on the Islamic State group's bastion Raqa and entered the city's east and west for the first time last month.

On Thursday, the US-backed Arab-Kurd alliance sealed off the jihadists' last escape route by capturing territory on the southern bank of the Euphrates.

"Today, they entered Raqqa's south for the first time and seized the Al-Hal market," Rami Abdel Rahman, head of the Syrian Observatory for Human Rights, said on Sunday.

He said some SDF fighters had advanced north across the Euphrates River, while others had attacked Al-Hal from the adjacent district of Al-Meshleb in Raqa's east.

"The market is fully under SDF control but IS is waging a counter-attack," Abdel Rahman said.

The SDF's Operation Wrath of the Euphrates also announced it had captured the Al-Hal market on Sunday.

Backed by the US-led coalition bombing IS, SDF fighters first broke into Raqa on June 6.

They have since seized a handful of neighbourhoods in the city's east and west but are facing fierce resistance by IS as they push closer to the city centre.

According to the coalition, an estimated 2,500 IS jihadists are defending the northern city.

IS overran Raqqa in 2014, transforming it into the de facto Syrian capital of its self-declared "caliphate," which it declared three years ago.

The city became infamous as the scene of some of the group's worst atrocities, including public beheadings, and is thought to have been a hub for planning attacks overseas.

The United Nations has expressed concern for up to 100,000 civilians it says are still trapped in the city.

US general: Baghdadi likely to be alive, 'we'll just try ....

US general: Baghdadi likely to be ....