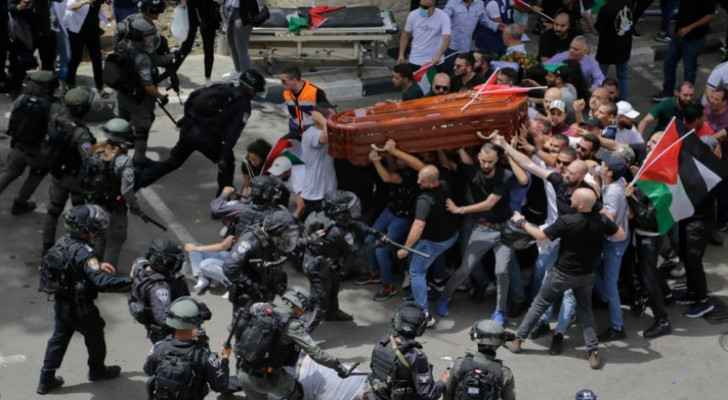 The Israeli Occupation police announced Saturday that it will open an investigation after its members attacked the funeral procession of Shirin Abu Aqleh Friday in Jerusalem, which almost caused the coffin of the Palestinian journalist to fall to the ground while its bearers were beaten.

Thousands of Palestinians participated in the funeral of the Palestinian-American journalist on Al-Jazeera, who entered the homes and hearts of Palestinians and Arabs, and was killed on Wednesday by a bullet in Jenin, in the occupied West Bank, while covering an Israeli Occupation military invasion, while she was wearing a bullet-proof vest bearing the "press" logo and a protective helmet.

When the coffin was taken out of the French Hospital in East Jerusalem, the police stormed the hospital yard and tried to disperse a crowd in which participants were chanting and waving Palestinian flags.

The journalist's coffin nearly fell to the ground when the police beat its carriers with batons, before it was straightened and raised at the last moment, according to scenes broadcast by local TV stations.

The police said in a statement Saturday that "the Israeli police chief... has ordered an investigation into the incident... The results of the investigation will be presented to the commissioner in the coming days."

The police added in its statement that "its members were subjected to acts of violence by the rioters, which prompted them to use force," stressing that it "stands by its members," but it wants "to draw lessons from this incident."

Pictures of what happened spread on social networking sites and aroused international shock.

US Secretary of State Anthony Blinken expressed his "deep alarm at the scenes of the Israeli police attacking the funeral procession."

For its part, the European Union condemned the "disproportionate use of violence and disrespectful behavior on the part of the Israeli police towards those participating in the funeral procession."

The French consulate in Jerusalem expressed its "extreme shock" at the "violence used by the police."

Germany said it regretted that the funeral did not take place "peacefully and in a decent manner."

Likewise, Spain held that "the use of disproportionate force is unacceptable."

Qatar announced in a statement that "the occupation authorities not only killed Shireen in cold blood while performing her duty, but also continued to terrorize civilians and funeral participants until her final resting place."

The Desmond Tutu Foundation considered that the scenes of police intervention "reminiscent of the brutality of dealing with people in mourning during the funeral of activists against apartheid" in South Africa.

According to a video broadcast by the Israeli Occupation police, a policeman shouted over a loudspeaker towards the crowd in the hospital yard, "If you don't stop these patriotic chants, we will have to disperse you by force and we will prevent the funeral."

The coffin was finally transferred to the Old City, where the burial ceremony of Abu Akleh, 51, was held in the Melkite Roman Catholic Church, which was crowded with mourners, before the crowds marched behind the coffin to Mount Zion cemetery, where the journalist was buried near the old town.

On Friday, the UN Security Council "strongly" condemned the killing of the journalist, in a statement issued unanimously, which represents a rare case of the council's unity on an issue related to the Israeli Occupation.