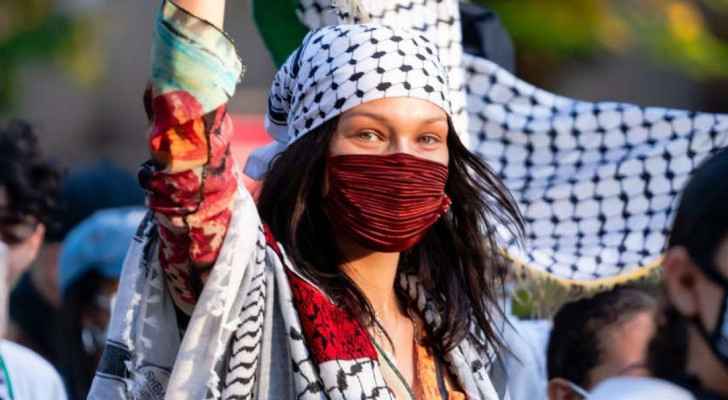 Palestinian-American model Bella Hadid took to Instagram to mourn the death of Al Jazeera correspondent Shireen Abu Akleh, who was killed by the Israeli Occupation Wednesday, May 11.

Hadid published several posts speaking about Shireen Abu Akleh. In one of her posts, Hadid published a video of Abu Akleh’s funeral and the attacks carried out by the Israeli Occupation during the funeral. Hadid said, “This is Occupation. This is the kind of torture and abuse Palestinians face at the hands of the Israeli military occupation.”

She continued, “No matter who you are, how can you watch this not and scream in rage and cry painful tears? How can you not see your mother, father, grandfather, sister, brother, in the eyes of our people?! Why can’t you see?”

Hadid condemned the attacks carried out by the Israeli Occupation on Palestinians during Abu Akleh’s funeral. 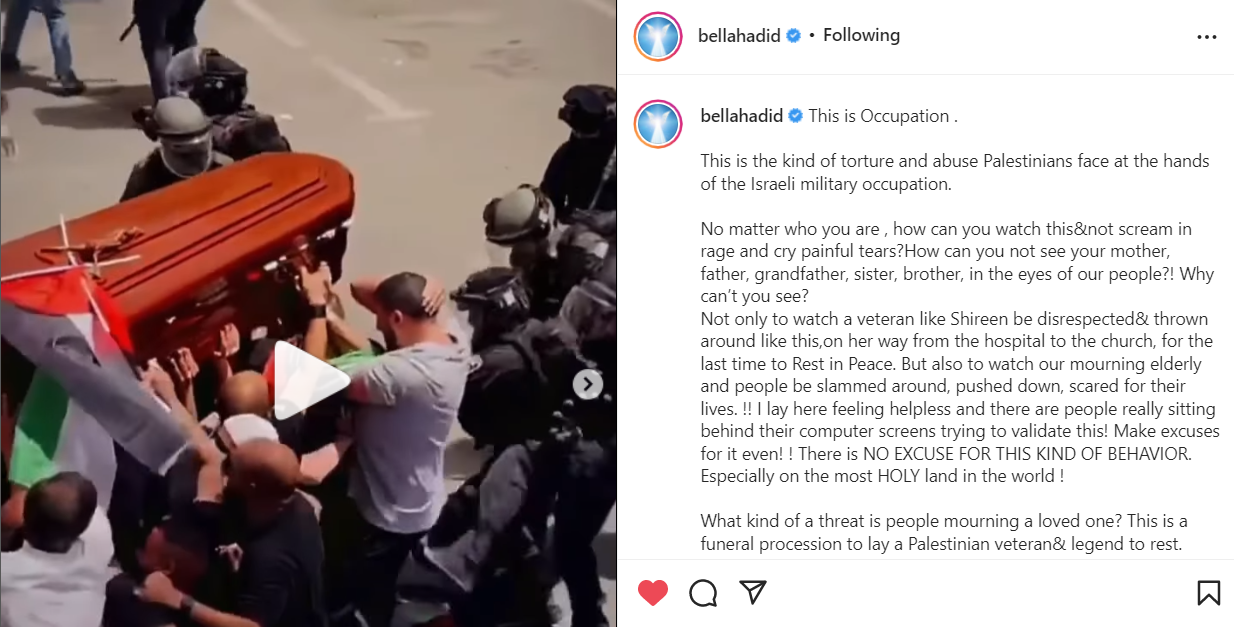 “Not only to watch a veteran like Shireen be disrespected and thrown around like this, on her way from the hospital to the church, for the last time to Rest in Peace. But also to watch our mourning elderly and people be slammed around, pushed down, scared for their lives!! I lay here feeling helpless and there are people really sitting behind their computer screens trying to validate this! Make excuses for it even!! There is NO EXCUSE FOR THIS KIND OF BEHAVIOR. Especially on the most HOLY land in the world!”

“What kind of a threat is people mourning a loved one? This is a funeral procession to lay a Palestinian veteran and legend to rest.”

Friday, the body of the slain journalist Shireen Abu Akleh was buried in the Mount Zion cemetery in Bab Al-Khalil in occupied Jerusalem.

Her funeral was held in the Roman Catholic Church in Jerusalem, and Muslims performed the Janazah (funeral) prayer for her in the French Hospital in Jerusalem, where her body had remained since Thursday.

Earlier, the Israeli Occupation Forces (IOF) attacked the funeral procession of the martyr Shireen Abu Akleh, as people were trying to get her body out of the French Hospital in occupied Jerusalem.

The Palestinian News Agency, Wafa, reported that the mourners had to take Abu Akleh’s body back to the hospital after the IOF attacked people who attended the funeral, fired sound bombs at the mourners, and beat them with batons, which led to the injury of dozens of them.

Al Jazeera veteran journalist, Shireen Abu Akleh, 51, was killed on Wednesday, May 11, after being shot by the IOF while covering an Israeli Occupation army operation in the occupied West Bank.

Palestinian Ministry of Health said in a statement that the martyr was shot in the head.

'If you want me to stop talking, they should stop ....

'Will you free my Palestine?': Bella Hadid on Instagram