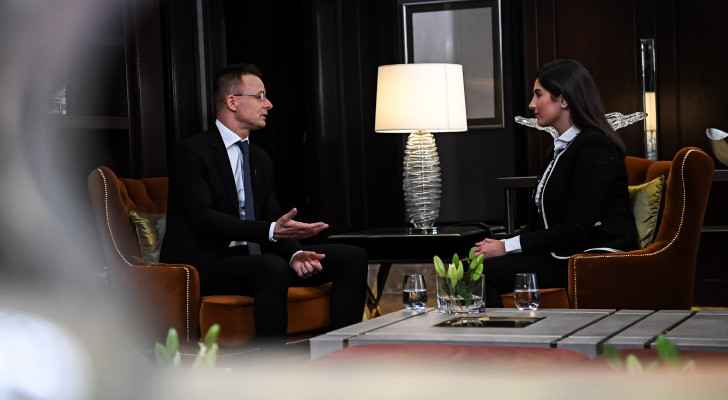 Wednesday, in an exclusive interview for Roya TV, the Hungarian Minister of Foreign Affairs and Trade, Péter Szijjártó, discussed multiple matters that included the measures taken by the Hungarian government to combat the spread of COVID-19, the strong relationship between Hungary and Jordan, the Hungarian protocols in dealing with migration and the Hungarian scholarships for Jordanian students.

The Minister talked about the challenges faced by Hungary during the pandemic especially in regards to the health and economic situations in the country and how there has been controversy on how to best handle the matter.

Szijjártó said that they were one of the first countries to reach a percentage of 60 percent of vaccinations, which supported them to attract the largest number of possible investments and to return once again to the normal economic situation, despite the bad health conditions the world suffered during 2020 and early 2021.

He also said that the Hungarian health sector is stable so long as it is not undergoing much pressure.

When asked about the Jordanian-Hungarian relations, and whether any new agreements or upcoming partnerships are underway, the Foreign Minister stated that Jordan is greatly valued and respected.

Szijjártó said that Jordan is the best ally in regards to keeping the migration crisis under control, since Jordan has been hosting refugees and does not use them as a political weapon against Europe.

“That's why Hungary is in favour of giving every possible support to Jordan, so today I have informed my colleague the Foreign Minister, Mr. Safadi, that we have brought 10 ventilators with ourselves to donate it to hospitals here in Jordan to be able to cope with the challenge of the pandemic,” the Minister said.

“The more foreign students study in Hungary, the more goodwill ambassadors we will have all around the world,” he said, adding that “it’s very important from the perspective of the future friendships and future relations with countries.”

Russia will 'consider' Hungary's request for ....

Russia will 'consider' Hungary's request for ....