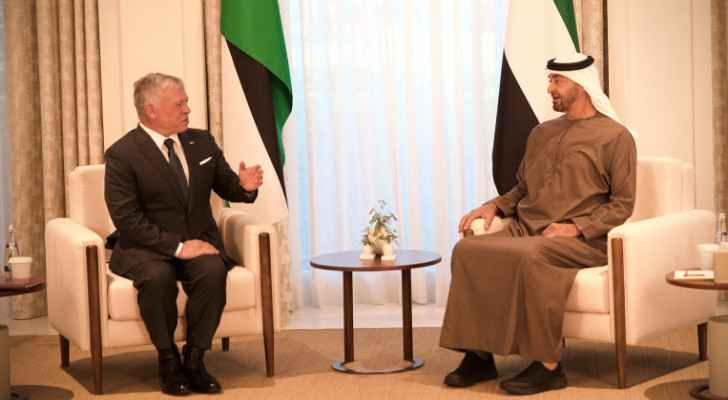 The talks, held at Al Shati Palace in Abu Dhabi, covered the deep-rooted bilateral relations and the latest regional developments.

King Abdullah and Sheikh Mohamed reaffirmed pride in the distinguished ties between Jordan and the UAE and keenness to expand cooperation across all fields, especially the economy.

Discussions also covered the importance of maintaining coordination on issues of mutual concern, in service of the two countries and peoples, as well as Arab causes.

His Majesty emphasised the need to step up efforts to reach just and comprehensive peace on the basis of the two-state solution, which guarantees the establishment of an independent Palestinian state on the 4 June 1967 lines, with East Jerusalem as its capital.

Discussing developments in Syria, the King reiterated Jordan’s support for efforts to safeguard Syria’s sovereignty, stability, territorial integrity, and the unity of its people.

His Majesty congratulated Sheikh Mohamed on receiving the 2021 Scholar-Statesman Award and on the UAE being selected to host the COP28 international climate conference.

For his part, the Abu Dhabi crown prince underscored the UAE’s keenness to enhance cooperation with Jordan, especially across economic, investment, trade, energy, and environment-related fields, in service of sustainable development in the two countries.

Prime Minister Bisher Khasawneh, Deputy Prime Minister and Foreign Minister Ayman Safadi, and Director of the Office of His Majesty Jafar Hassan attended the talks on the Jordanian side.

UAE Deputy Prime Minister and Minister of Presidential Affairs Sheikh Mansour bin Zayed Al Nahyan and a number of senior officials attended the talks on the Emirati side.