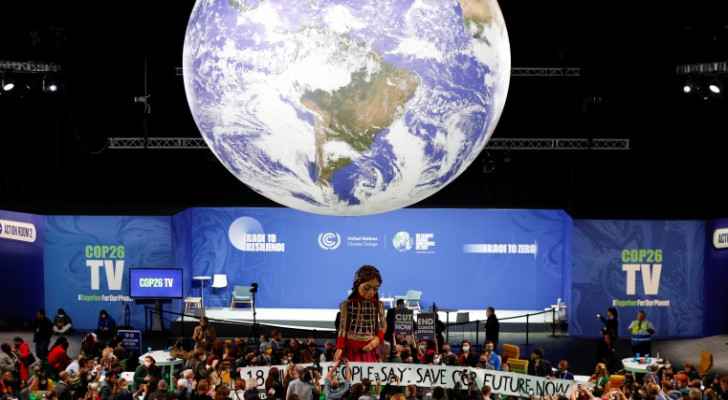 Climate promises from nations at COP26 ring "hollow" while they continue to invest in oil, gas and coal, UN chief Antonio Guterres said Thursday, as the summit struggles to make headway its the goal to halt devastating warming.

Representatives from nearly 200 countries have gathered in Glasgow for painstaking talks aimed at keeping the world within the Paris Agreement goal of limiting temperature rise to between 1.5 and 2 degrees Celsius.

But with emissions still rising and current promises putting the world on a path to heat far beyond that target, negotiators were wrangling over a range of issues -- from slashing greenhouse gases to financial help for countries already facing supercharged storms, floods and droughts.

"The announcements here in Glasgow are encouraging -– but they are far from enough," Guterres told the COP26 climate summit, urging negotiators to "pick up the pace."

COP26 President Alok Sharma warned that time was running short to clinch a deal before the meeting's scheduled end on Friday evening.

"We still have a monumental challenge ahead of us," he said, appealing to delegates to show more ambition.

"Quite a lot has been achieved. But we are still some way away from finalising those very critical issues that are still outstanding."

He welcomed a joint China-US pact to accelerate climate action this decade, which experts said should allay fears that tensions visible early in the summit might derail the talks.

The surprise declaration, unveiled by envoys John Kerry and Xie Zhenhua, said the world's two largest emitters "recognise the seriousness and urgency of the climate crisis" and the need to slash methane issues, although it was light on other detailed action.

The 2015 Paris Agreement saw nations promise to limit heating to "well below" two degrees Celsius and to work towards a safer 1.5C cap through sweeping emissions cuts.

The 1.1C of warming so far is already magnifying weather extremes, subjecting communities across the world to more intense fire and drought, displacement and severe economic hardship.

But the UN says that even the most up-to-date national pledges set Earth on course to warm 2.7C this century.

A handful of nations committed to phasing out oil and gas production, in what organisers Denmark and Costa Rica hope will inspire a global movement towards ending fossil fuels.

"But just as the Stone Age did not end due to lack of stone, the fossil era will not end because there's no more oil left in the ground. It will end because governments decided to do the right thing."

However major emitters were not part of the initiative.

Wednesday saw the release of draft "decisions", which were the first real indication of where nations are 10 days into deeply technical discussions.

The text, which is sure to change during ministerial debates, called for nations to "revisit and strengthen" their new climate plans, known as nationally determined contributions (NDCs) by next year, instead of 2025 as previously agreed.

The issues that remain unresolved at the COP26 include how vulnerable nations are supported financially to green their economies and prepare for future shocks.

Rules over transparency, common reporting of climate action and carbon markets are all also still under discussion.

Also contentious is wording in the draft text to "accelerate the phasing-out of coal and subsidies for fossil fuels", something which large emitters are opposing, according to sources close to the talks.

And nations already hit by climate disasters are demanding "loss and damage" support from rich emitters.

But the main sticking point is ambition: which countries plan to slash their carbon emissions fast enough to avert dangerous heating.

"We need action if commitments are to pass the credibility test," Guterres said, urging negotiators not to settle for a lowest common denominator outcome.

"We know what must be done."